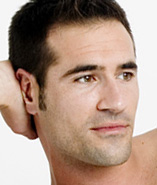 Background:  Chin augmentation is the most common implant enhancement procedure of the face. It is usually highly successful as long as the chin is not horizontally too short. Once horizontal chin deficiences approach 10mms or more, it will also have other dimensional issues as well being also vertically short.Trying to make a chin implant correct an overall short chin will leave the patient with a suboptimal result.

Once a chin implant augmentation procedure is deemed inadequate, one has to consider whether a new implant or a sliding genioplasty would be better. With greater than a 10mm horizontal deficiency, only a custom computer-designed implant will suffice. Besides that no existing commercially-made chin implants do not exceed 11mms, none provide any vertical lengthening at all. The other option is a sliding genioplasty. The downfractured chin segment can be moved as far forward as the thickness of the chin bone which almost always is more than 10mms. The other benefit that a sliding genioplasty provides is that the chin can be vertically lengthened by opening up the chin segment as it is brought forward.

While a sliding genioplasty can provide significant horizontal and vertical chin changes, it is not always a perfect chin augmentation procedure either. The amount of horizontal projection increase can not exceed the thickness of the chin bone so very short chins may still be left aesthetically deficient. In addition as the u-shaped chin segment is brought forward, the chin shape will actually become more narrow as the projection is increased. This may be an aesthetic disadvantage for some men who prefer or desire a more square or wider chin appearance in the frontal view.

Case Study: This 50 year-old male wanted to make one final effort at improving his chin shape. He had a prior history of two chin augmentation procedures using implants. He originally had an original 7mm anatomic silicone chin implant that was subsequently replaced by a 9mm Medpor two-piece chin implant that had been separated in the middle to give more of a square chin look. While he was improved with each procedure, he felt his chin was still too short. In addition, his chin felt tight and mildly uncomfortable even years after the second procedure. 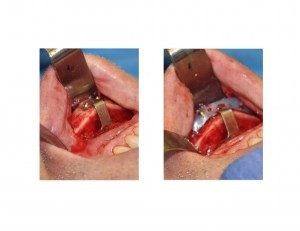 Under general anesthesia, an intraoral anterior mandibular incision was made. The indwelling Medpor implant was exposed, unscrewed and removed. Contrary to popular perception the Medpor material did not have any bone ingrowth and, although the surrounding tissues were adherent, was not unduly difficult to remove. A horizontal chin osteotomy (sliding genioplasty) was done with the back end just beyond where the tails of the removed implant were. The downfractured chin segment was brought forward 12mms and secured into placed with a titanium step plate and two screws above and below the osteotomy line. To make the chin have more width, a small square silicone chin implant was placed in front of the chin segment and secured to it with screws. The mentalis muscle was then resuspended over the implant and advanced bone in layers. 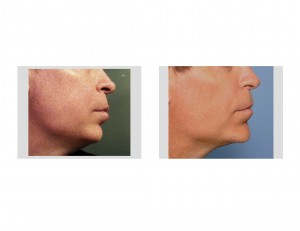 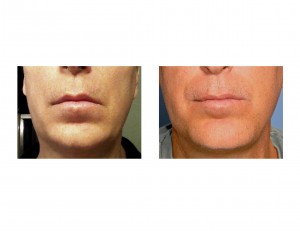 1) Once a horizontal chin deficiency exceeds 10mms, standard chin implants will not produce an ideal result.

2) A sliding genioplasty can almost always extend the chin further forward than an implant.

3) To overcome the round chin shape that will occur from a sliding genioplasty, a square chin implant can be overlaid in front of the advanced chin segment.