Background: There are numerous congenital ear malformations, many of which are not that common. One of the more rare congenital ear deformities is that known as Stahl’s ear. While described long ago in the 19th century, it is more commonly known today as Spock ear in reference to the more well known character on the TV series and subsequent movies. (Star Trek)

The Spock ear deformity is characterized by a pointed or elf-like ear due to the misshapen and flattened upper third of the ear with a blunted antihelix, malformed scapha and a third crus. It has variable presentations with a posterosuperior crus with a sharp helical ridge, a round ridge , the appearance of two ridges and a crus which extends posterinferiorly. There is no known reason why such malformed ears occur although it is known to have a familial tendency.

If seen early enough after birth, ear molding devices can be used to satisfactorily reshape Spock ears. However after 6 to 8 weeks old the ear cartilage becomes resistant to external molding influences and ultimately ear reshaping surgery is needed.

Case Study: This 4 year-old male child presented with one of the types of a Spock ear deformity. This would be classified as a Type 1 Stahl’s ear with a posterosuperior crus and a flat and sharp upper helical ridge. 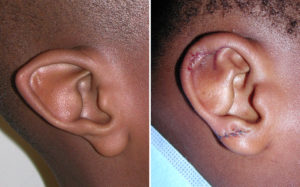 The Spock ear deformity has a variety of presentations, some more severe than others. In this more server presentation the basic shape of a more normal ear was created by reshaping the flattened upper third of the ear and making less wide and more tall. Even though it lacks an antithetical fold, its overall shape is more typical of a normal ear.