Background: Facelift surgery is very common and is the single most effective procedure for correcting aging issues of the jowls and neck. By removing excess fat in the neck and jowls, tightening the platysma muscles and redraping loose skin up toward the ears and temporal hairline, a recontouring of the lower face is achieved. In every case of a facelift, the immediate surgical change is often dramatic and the more advanced the aging the more dramatic the change will be.

But no matter how a facelift is done, it has significant reliance on tissue pull particularly that of the skin. Because the skin is an elastic structure, there is always going to be some eventual recoil from the stretch imposed on it.  (not to be confused with eventual ongoing aging but a relatively immediate after surgery effect) In a facelift this is most commonly seen in the submental region. This point is exactly centered between the two sides of the pull on the sides of the face. Because it is so far from the area where the pull is exerted, it is the first facial area to show some ‘relapse’ as a result of this tissue relaxation phenomenon.

Case Study: This 40 year-old female wanted to improve her neck and jowl sagging. Despite that she was fairly young, her neck changes were more significant than her chronological age would indicate. She had fat and loss of her cervicomental angle. Her skin was also very thin and elastic which undoubtably made a contribution to her early tissue sag. 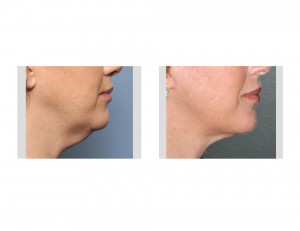 Under general anesthesia, her submental and neck regions were initially evacuated of some fat by liposuction. Through a submental incision, the neck skin was widely undermined. A retrotragal preauricular and postauricular incisional approach was done around the ears to undermine the skin until it connected to that of the neck. Using a sutured SMAS plication technique done in differing vectors, the deeper tissues were lifted and tightened. The skin was then lifted and draped up over the ears, trimmed and the incisions closed. 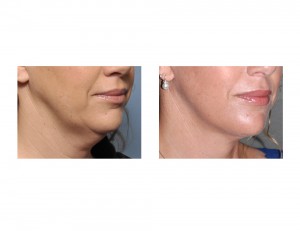 Her four month facelift result showed a significant improvement in her neck and jawline. While the change could be called dramatic, some tissue relaxation had settled into the submental area under the chin. This was different that what was seen in the first few months after her surgery.

A suhmentoplasty procedure can correct the immediate tissue relaxation effects that can occur after many facelifts that have corrected significant neck changes. This can be done with with a crescent or an inverted T type skin excision pattern. It is prudent to advise patients that such tissue relaxation can occur and it is not rare. A submentoplasty for correction of submental skin relaxation after a facelift can be performed anytime six months to a year after the original facelift procedure.

1) Facelift surgery commonly undergoes some relaxation of the tissues as they heal and relax from the initial stretching forces.

2) Skin relaxation after a facelift is frequently seen in the submental and central neck area which is furtherest from the point of skin excision and pull. (ears).

3) A submentoplasty procedure may be beneficial six to twelve months after a facelift to ‘retighten’ the central neck area if any skin sag develops.