Background: Excessive chin projection can occur in numerous dimensions and often involves multiple dimensional excesses concurrently. But isolated chin excesses or single dimensional macrogenias (large chins) do occur and presents as either in the horizontal or vertical dimensions.

Vertical macrogenia can be effectively treated through two different approaches unlike many other types of large chins. An intraoral chin down fracture with a wedge ostectomy can shorten the height of the chin when the down fractured segment is brought back together. Conversely an inferior or submental technique can be done where the osteotomy is done from the inferior border rather than in the middle of the chin as in the intraoral approach. Both vertical chin reduction techniques have their advantages and disadvantages.

The submental chin reduction approach, because of the skin incision that is needed, often is thought of as not ideal. But it has several advantages including bone work that is well below the mental nerve and direct line of sight to remove and reshape the bone.

Case Study: This young female was bothered by her large chin which gave her face an excessively long appearance. By facial third measurements her lower facial third was out of proportion to the upper and middle facial thirds by a positive 15mms. (55mm upper, 55mm middle, 70mms lower third)

Under general anesthesia, a curved submental incision was made and the soft tissue degloved off the end of the chin. An 8mm inferior border osteotomy was performed with a reciprocating saw. The sides were burred down to return to a rounder chin shape. The exposed marrow space was covered with gel foam and thrombin and the geniohyoid muscle reattached to the chin with sutures and burr holes in a horizontal mattress fashion.  A 4mm wedge of skin, fat and muscle was removed from the neck side of the incision and a submental tuck performed. 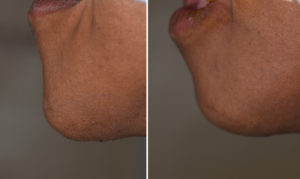 The vertical reduction in the chin length could be clearly observed at the end of the surgery. Although by measurements she was a + 15mm of excessive length that amount of bone removal was felt to be excessive. Coming from below allows maxima bone reduction and reshaping while staying well away from the exit of the mental nerve situated between the first and second premolars about 1 cm above the inferior border.

1) Chin reduction for excess vertical length can be done either through a submental or intraoral approach.

3) Submental vertical chin reduction may or may not require a soft tissue excision/tuck as well.