Background: A full upper lip and a broad smile are several mouth features that are associated with youth and attractiveness. While there are a variety of lip enhancement procedures, the lip lift represents just a minority of the cosmetic lip procedures done. Its largely hidden subnasal scar location and the visible upper lip shortening effect give it a limited but defined role in lip enhancement options.

Less has been described about how to manage a ‘small mouth’. A short horizontal distance between the corners of the mouth is often perceived as the width of the mouth that lies within vertical lines dropped down from the pupils of the eyes. Many have asked about how to widen their mouth but have been discouraged from doing so because of concerns about adverse scarring. But cosmetic mouth widening surgery should not be confused with the corner of mouth reconstruction that is done in cases of congenital or traumatic microstomia.

Case Study: This 22 year female wanted to shorten her long upper lip and get more of a prominent cupid’s bow appearance. (the philtral distance was 18mms in length)  In addition she wanted to have more upper tooth show at the bottom of the upper lip smile line. She also felt that the width of her mouth from corner to corner was too small and wanted it widened. 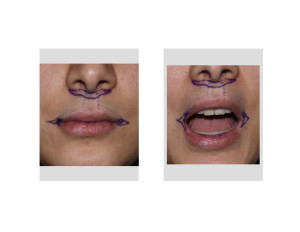 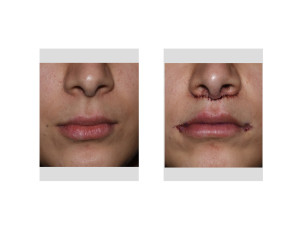 Under local anesthesia in the office, a bullhorn pattern skin excision was marked out under the base of the nose and removed. An excisional skin width of 5.5mms was made along the philtral columns, making it almost one-third of the upper lip length removed. At the same time an arrow-shaped segment of skin was removed from outside the corners of the mouth. (horizontal length of 5mms removed on each side) The mucosa at the corners of the mouth was mobilized and brought out to a new corner of mouth position. This created a 1 cm increase in horizontal mouth length. 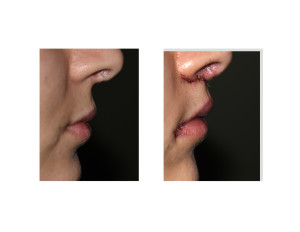 A subnasal lip lift creates a shorter upper lip which is often associated with a younger appearing upper mouth area. Short mouth widths can be increased by moving the location of the outer corner of the mouth mucosa. (mouth widening procedure) A subnasal lip lift and lateral commissuroplasties can be done at the same time.

3) A subnasal lip lift and mouth widening surgery can be done together for a more complete perioral change.