« A New Shaped Implant for the Treatment of Temporal Hollowing
Neck Rejuvenation with Liposuction vs. Submentoplasty »

Background:Penile length or show is an important feature of a man’s body image. While there can be debate as to how much penile length is normal or of importance, all would agree that some penile show is needed. When little to no penis is seen, this can impact a man’s self-image severely as well as inhibit its sexual capability.

There are a variety of conditions that can cause a hidden or concealed penis which merit a full urologic work-up and evaluation. The overlying soft tissues, including the suprapubic mound and the lower part of the abdomen, can either cause or magnify other medical causes of the buried penis condition. Shrinking the size of all tissues that surround the penis may help increase the amount of shaft length seen in the non-erect state. 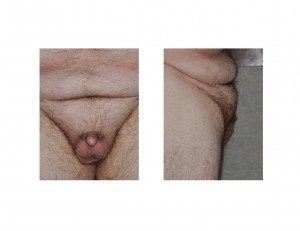 Case Study:A 34 year-old male was seen with the desire to have greater penile exposure. Despite some significant weight loss, he was unable to still see his penis. While it became more evident when erect, it was nearly complete buried when not. This was a major source of embarrassment for him.

On examination, there was a moderate-sized suprapubic mound around the penis of which only the very tip of it could be seen. On pressing down around the mound, greater shaft length appeared. There did not appear to be any tethering or restriction of the penile skin. There was also a hood of suprapubic skin excess from the lower abdomen which pushed down onto and almost over the buried location of the penis. 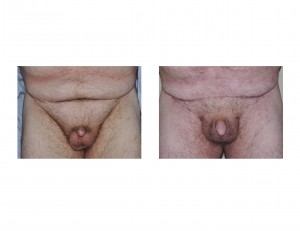 The first step in the surgical treatment of his buried penis was liposuction of the suprapubic mound. Using the Smartlipo probe at 30 watts, the suprapubic mound and lower abdomen was initially treated with7,500 joules of energy. Then a 4mm cannula was used to aspirate a total of 275cc of fatty aspirate creating a visible reduction of size of the mound. Because of the size of the lower abdominal area, a suprapubic lift was done removing 8” of skin and fat vertically and 22” horizontally across the lower abdomen. This was excised down to the abdominal fascia in a wedge fashion and removed. A drain was inserted and a compressive dressing was applied. This was done as an outpatient under general anesthesia. 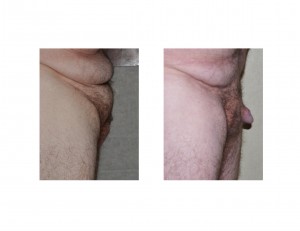 The drain was removed one week later. He wore lower abdominal compression for three weeks after surgery. At that time, the largest amount of swelling had gone down and the benefits of the procedure could be seen. Swelling continued to go down and a final result was reached by eight weeks after surgery. Penile show was much improved and the shape of the lower abdomen and suprapubic mound was significantly flatter. He felt he got an ‘extra’ 3 inches of visible penile length and his self-confidence skyrocketed…to quote him directly.Final results will take a full 3 months to appreciate until the suprapubic mound area again feels soft with normal skin sensation.

1) One of the contributing causes of a buried penis is a large enveloping suprapubic mound of fat and a suprapubic and lower abdominal skin overhang. Penile length can be severely shortened when buried by overlying and surrounding soft tissues.

2) Liposuction of the suprapubic area can help increase penile show by reduction of an obscuring fatty mound.

3)Suprapubic liposuction for the buried penis may be combined with excision of lower abdominal skin and fat to simultaneously create a suprapubic lift as well. Fat reduction and skin lifting combine for the best exposure of penile length.