Background: The shape of the ear is complex and its affected by how its cartilage structure becomes formed during its embryologic development. With its array of folds and concavities the ear assumes a unique shape for each person. In addition to its shape,  its size and orientation to the side of the head affects how visible it is when seen in the frontal view.

In the protruding ear there is always some degree of helical rim shortening although much more minor than in the truly constricted ear. This perceived effect is caused by the lack of a well defined antihelical fold. Without an antihelical fold the outer helical rim becomes folded over or shortened.

Case Study: This teenage female was bothered by ears that stuck out  and they were a source of embarrassment for her. She had a well formed concha which was not excessive. 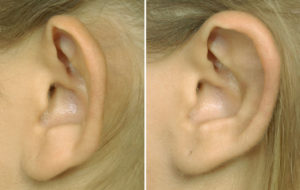 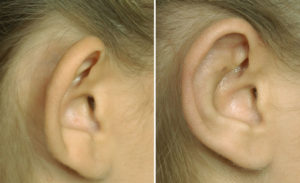 With a setback otoplasty achieved through antihelical fold creation, the length of the helical rim actually becomes longer. Such helical rim elongation allows the ear to set back further against the side of the head in a less conspicuous manner.