Background: Most people pay little attention to the size and shape of their upper arms, unless they are too big or floppy. With extreme weight loss, aided by bariatric surgery or a very dedicated diet and exercise program, the upper arm skin will sag considerably. While the loss of fat deflates the volume of the upper arm, the enveloping skin will not usually shrink down in a linear fashion. This results in a flap of skin that hangs down off of the back of the arm.

Know affectionately as ‘bat wings’, this excess arm skin will usually extend beyond the junction of the arm and the armpit. It will not only go into the armpit but may reach all the way down into the side of the upper chest wall. This more commonly occurs in women and much less so in men. The greater the weight loss, the greater the bat wing will be.

The arm lift procedure is the only approach to the bat wing problem that results from a lot of weight loss. While extremely effective, one has to be willing to accept the trade-off of a long scar in its place. While I have yet to find an extreme weight loss patient that it not willing to accept it as a replacement, it is still a goal to have the scar as less noticeable as possible. Arm lifts scars can be placed either in inner or medial aspect of the arm, directly on the back of the arm (posterior), or between these two locations. 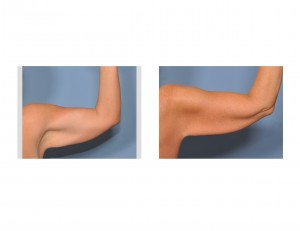 Case: This 38 year-old female was bothered most by her loose upper arm skin after her 150 lb. weight loss. While she had other loose skin issues, particularly on the breast, her arms were first priority probably due to her primary activity as a fitness instructor. Those outfits do not hide the upper arms very well.

The pattern of excision of the upper arm skin must be placed parallel to the desired final scar placement. Having done arm lifts in all three arm locations, I have found that the best in my experience is betweenthe inner aspect (medial) and back of the arms. This makes arm positioning in the operating room not unduly stressful on the patient or the surgeon. And it puts the scar in skin quality (thickness) that does much better than on the medial side of the arm in terms of healing and visibility. 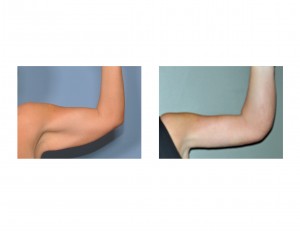 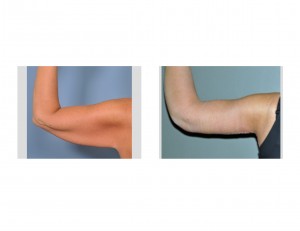 Her arm skin excision removed 11 cms of skin and fat at its widest in the middle of the upper arm. The excision carried well past the armpit into the upper chest wall. Because it crossed the axillary skin crease, a z-plasty was done to break up the linear scar line and decrease the risk of scar tightening and contracture in this area.

She had a virtually painless recovery and took no pain medications after the first postoperative night. Her arms did feel tight and this tightness was most felt in raising her arms above her head. She had her covering tapes and armpit sutures removed two weeks later. Even with some residual swelling, the change in the appearance of her arms was dramatic. This photo shows her appearance at the time of her two week postoperative visit 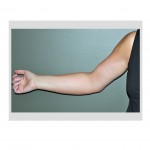 1) Significant sagging of the upper arms is almost always created by weight loss, whether created by bariatric surgery or diet and exercise. Liposuction is not an adequate treatment for the loose skin of arm ptosis.

2) The arm lift involves direct excision of the loose skin of the upper arm. This usually requires extending the excision into the armpit area and onto the lateral chest wall due to the amount of loose skin.

3) Better scars and less postoperative wound complications occur when the excision pattern and closure is oriented more towards the back of the arm. The traditional inner arm lift results in wider scars and more problems with wound separations.