Background: The constant movement of the eyelids and their thin skin makes for early and inevitable signs of aging. The eyelids almost always shows the signs of age first. It is also easily observed since the eyes are the fundamental focal point of human conversation. The signs of periorbital aging are always associated with such patient complaints as ‘I look tired’, ‘I look older than I feel’ and ‘My eyes feel heavy’.

Despite the relatively small amount of upper eyelid skin that naturally exists, it is incredible how much excessive and loose skin can be created. Often it appears that there is at least twice as much skin present than would normally exist in the upper eyelid as one ages. The amount of fat that comes sticking out (herniated) from below the eyeball to make up the lower eyelid bags can be equally impressive.

Case Study: This 55 year-old female wanted to improve the appearance of her tired and aging eyes. She had so much upper eyelid skin that it had fallen down onto her lashlines, partially obscuring her vision. Her lower eyelids had large bulging bags and wrinkled skin with numerous brown spots. 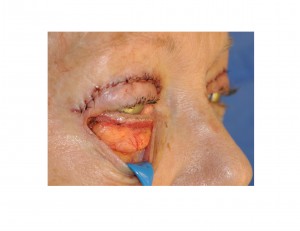 Under general anesthesia, a large amount of upper eyelid skin was removed. More skin was removed laterally (near the outer corner of the eye) than medially. (near the inner corner of the eye) On the lower eyelids, a skin-muscle flap was raised and the protruding medial, central and lateral fat pads were removed. The lower eyelid skin was conservatively trimmed of excess skin and the orbicularis muscle and skin resuspended out laterally. 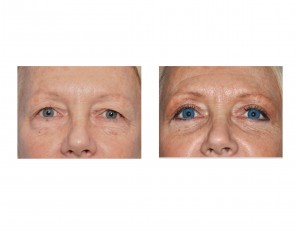 Her postoperative course was typical for eyelid surgery with substantial swelling and mild bruising for the first ten days after surgery. Sutures were removed at one week after. By two weeks she looked nearly normal and by three weeks after the procedure she looked completely normal and non-surgical in appearance. Her last follow-up at three months after surgery showed a refreshed and rejuvenated periorbital appearance. 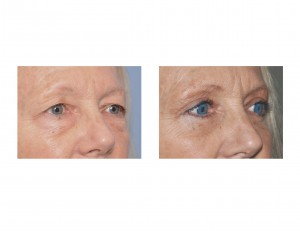 Blepharoplasty surgery has one of the highest patient satisfactions of all the rejuvenative facial plastic surgery procedures. Despite the small size of the eyelids, comparatively small amounts of skin and fat removal can make for a dramatic change in appearance. Every blepharoplasty patient’s goal is to look refreshed, maintain a natural appearance and avoid complications. This is done by not removing too much eyelid skin, particularly on the lower eyelid.

1) Aging of the eyes occurs by hooding of the upper eyelid skin and bulging of lower eyelid fat. Both eyelids develop increased wrinkles and skin rolls.

3) A lower blepharoplasty removes or relocates herniated fat and removes a conservative amount of skin with corner of the eye tightening.