Background: The shape and size of the forehead is an important aspect of facial aesthetics. It is well known that it should compose up to one-third of the vertical facial height.  When exceeding this one-third proportion the forehead can look too large or be too dominant.

The most common reason for a large forehead is a high hairline. The distance between the eyebrows and the frontal hairline is long (usually greater than 6 to 6.5cms) and as a result the forehead looks big. This managed by a hairline advancement whose degree of forehead reduction is controlled by the amount of scalp laxity or how much it can be surgically mobilized.

A more infrequent cause of a prominent forehead is frontal bossing. This is an overgrowth of bone of the forehead, usually the upper portion, which makes it stick out often beyond the projection of the brow bones. The disproportion of the strong upper forehead makes the forehead look imbalanced in addition to being too large. In an adult, the only method of frontal bossing reduction is removal of bone through burring. How much the frontal bossing can be reduced is a function of the thickness of the outer cortex of the skull.

Case Study: This 45 year-old female had a very prominent forehead due to a combination of frontal bossing and a high hairline. (8cms) 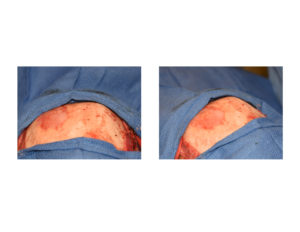 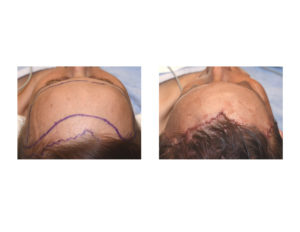 Under general anesthesia through a frontal hairline incision, the frontal bone was burred down to the diploic space. The amount of bone reduction can be seen with one side reduced (left) and the other untreated. (right) The scalp was then mobilized all the way to the back of the head down to the nuchal ridge and brought forward for her hairline advancement.

Her immediate results showed a dramatic improvement on her forehead shape and proportion. The hairline scar had healed fairly well particularly in the central area which is under the greatest tension.

Total forehead reduction is a combination of frontal bone reduction and a hairline advancement. Both are done through a single hairline incision that extends down into the temporal hairline.

1) A prominent forehead can be caused by with a high hairline, bossing of the frontal bone or both.

2) Total forehead reduction is a combination of frontal bone reduction and a hairline advancement and provides maximal improvement of forehead shape.

3) The pretrichial hairline scar can heal fairly well even though it is under tension at the most central ares of closure.