Background: The neck is generally a flat surface in youth that may have a bump or prominence in the middle about halfway between the jawline and the upper sternum of the chest. This laryngeal prominence, known more commonly as the Adam’s Apple, is formed by the size and angle of the thyroid cartilages that surround the larynx or voice box. This appears as a lump under the skin that is more prominent in men as the thyroid cartilages  form an acute angle where they meet in the middle. In women, this bump is much less visible, if at all, as the thyroid cartilage angle is more rounded rather than acute.

The laryngeal prominence has the name Adam’s apple for disputed reasons from a biblical  origin of an apple being stuck in Adam’s neck to a hebrew mistranslation of the words ‘man bump’. Regardless of what it is called, its purpose is to protect the larynx and the vocal cords which it contains. Its size also influences the depth of the voice. The bigger the laryngeal prominence the larger the voice box is creating a deeper toned voice.

Reducing the prominent Adam’s apple is a cosmetic neck surgery that has been done for decades. Know medically as a chondrolaryngoplasty, it is easier to call it by its more common name, a tracheal shave. While it is often thought as only being desired by transgender men to women conversions, that may be historically true but not accurate today. I done as many tracheal shaves in men who were merely bothered by its degree of prominence as that as part of facial femninization surgery.

Case Study: This 35 year-old female had long been bothered by the size of her adam’s apple. She was a tall thin female with little subcutaneous fat. Her thyroid cartilages were very angular, coming to a sharp point that stuck out prominently. 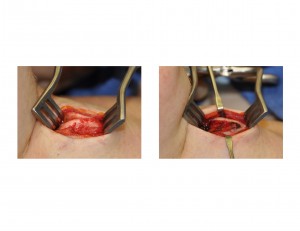 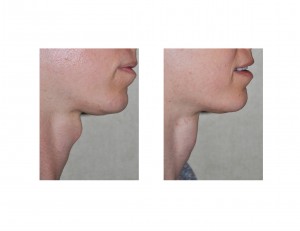 She had minimal pain and no bruising afterwards. There was some moderate swelling and firmness over the area for a few weeks. the scar took several months to completely fade. The result shows the elimination of the thyroid bump and a much smoother and more feminine neckline. 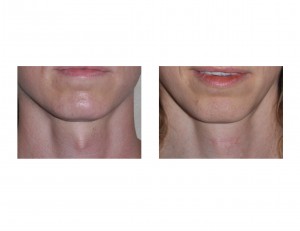 Tracheal shaves for the prominent adam’s apple is not new. In reading its history, it has been associated with a wide range of complications including voice changes and laryngeal nerve injury. In my experience, I have seen only aesthetic issues with tracheal shaves which revolve around under- resection. It is important to get the best reduction possible but one should not over weaken the cartilages or violate the mucosal lining in so doing. It is always better to leave a  much reduced hump with no complications than a completely flat one with a complication.

1) The prominent adam’s apple in the neck is the result of large paired thyroid cartilages and thin neck tissues.

3) The prominence of the adam’s apple can be significantly reduced but can not always be reduced enough to make the neck completely flat.