Background:  The ear is comprised of many individual shapes created by the shape of the underlying cartilage. It is unclear as to the functional significance of many of these cartilage prominences. But the most anterior one, the tragus, has a clear functional role in the deflection of sound waves back into the external auditory canal. It lies in front of the external auditory canal, and opposite the concha, and is a semi-circular piece of small cartilage that sticks up and angles back slightly towards the ear.

Everyone has a tragus and it is paid little attention unless it somehow becomes deformed or absent. Missing a tragal prominence makes the ear look unusual as you can then see right into the ear canal. Having a tragus that is too prominent can make it look like an abnormal bump in front of the ear.

One aesthetic procedure that is well known to cause tragal deformities is that of a facelift. When the skin is redraped over the ear in a facelift there are several maneuvers that can potentially change the shape of the tragus. If too much skin is removed in closing over the front of the tragus, postoperative scar contracture will pull on it making it bend forward and becoming more prominent. From a similar tension cause, if the support for the facelift effect is from the skin pull only, postoperative pull back and scar can similarly cause the tragus to be pulled forward.

Case Study: This middle-aged female had a prior facelift and developed a prominent tragus as it was pulled forward. With her thin face, the tragus was very visible and unusual looking. 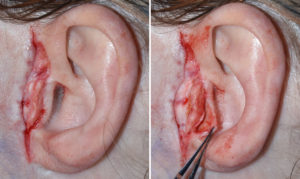 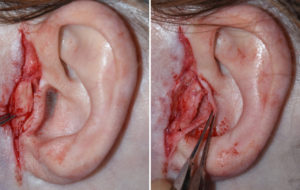 Under general anesthesia for many other facial procedures the skin of the tragus was degloved on both its anterior and posterior surfaces. A cut partially through cartilage from its back surface was done and two sutures placed to bend the upper cartilage piece back over the lower piece. This effectively reduced its prominence while still leaving a tragal bump present.

Some may ask why not just cut the top part of the cartilage off instead of bending it back and changing its shape? Because the cartilage has been pulled forward merely amputating the top part will make it look like it is not present at all. Bending it back reduces his height while creating an anteroposterior thickness so it still looks like a tragal bump.

1) Too much tension on the ear from the skin closure in a facelift closure can cause tragal displacement or excessive tragal show.

2) The traction forces from the skin and scar cause a permanent change in the shape of the tragus.

3) Reducing tragal displacement can be done by reshaping the cartilage by a chondrotomy and suture repositioning. (tragus cartilage reshaping)