« Understanding the Zones of Midface Implants
Case Study: A Limited Facelift for the Appearance of Jowls »

Background: A tummy tuck, or abdominoplasty, is one of the best and most reliable body contouring procedures. For many women after childbirth or for men and women after extreme weight loss, a classic tummy tuck procedure can make a world of difference. But unlike the many marketing ads and images, the sheer size of the procedure and the tissues removed does not give everyone a perfect waistline or result. For some patients after surgery, and for all patients considering it, the reality is that revisional surgery or touch-ups may be desired or needed.

Case Study: This 48 year-old female was tired of her full and hanging belly. While she was not  a diet or exercising fiend,  she felt that she was never going to get rid of this problem. As a result, she inquired about a tummy tuck or abdominoplasty. With the amount of skin and fat that she had, and that it hung down over her pubic region, a full or complete tummy tuck was the best option. She was ore than willing to accept a long horizontal scar as a trade-off. (as well as a scar around her new belly button) 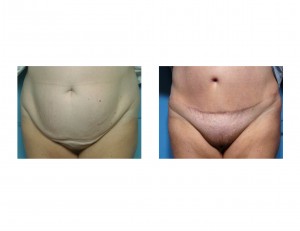 She underwent the full abdominoplasty procedure with successful results, giving her a tighter and more narrow waistline. Over two years after the procedure, she inquired about making some minor improvements to the result. Specifically, she wanted the fullness of the pubic region reduced. A protruding pubic area after a tummy tuck is quite common. This is because the tightness of the scar around the waistline above the pubis makes its fullness stand out. While it was always that full, it only became apparent when it was lifted and juxtaposed against a tighter waistline scar. Also, the central tummy tuck scar remained wider and more red than the rest of the scar. This is commonly seen as the middle of the scar was originally exposed to more tension during the tummy tuck closure than the sides of the wound. 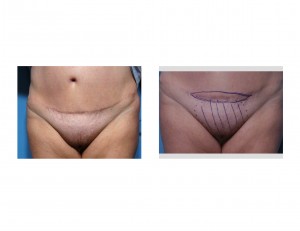 1) Tummy tuck surgery can make a dramatic difference in one’s waistline shape and frontal trunk contour. But it can not solve every minor detail of the abdominal problem and there are almost always residual minor issues of scar and tissue redundancies.

2) Revision of tummy tucks are not rare and can be done as early as three to six months after the original surgery depending upon the type of concern.