Background:Tummy tuck surgery, or abdominoplasty, provides an unparalleled amount of trunk reshaping. With excessive and loose abdominal skin caused by pregnancy or large amounts of weight loss, only cutting it out can really provide the desired amount of flattening and tightening improvement.

While a tummy tuck provides a great amount of abdominal tightening, the most significant location of its effect is around the waistline, directly where the closure/scar lies. This is exactly the area which shows the maximal effect of the tissue removal. It is very similar to that of wearing a belt and tightening it. This ‘banding’ effect creates the narrowest zone of abdominal circumference which may show fuller areas either above or below it.

One of the common areas of dissatisfaction in tummy tuck surgery is persistent fullness or tissue sag that remains below the scar line. The indentation caused by the tight abdominal scar line can make the pubic area stick out further than what lies above it. Or the pubic area may continue to have a sag because it was minimally lifted from the tummy tuck.

Evaluation of the pubic area prior to tummy tuck surgery is often overlooked, much to a patient’s dissatisfaction after surgery if fullness or sagging remain. Patients should not assume that a tummy tuck will always make the pubic area as lifted or as flat as the middle part of the abdomen. 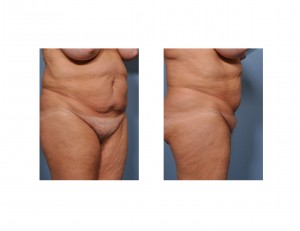 Case Study: This 59 year-old female from Indianapolis wanted to finally do something about her expanding waistline. She never had much of a stomach until the past ten years where it has grown to the point of being uncomfortable in addition to also being aesthetically unpleasing. She thought about non-surgical methods of fat reduction and liposuction but came to the realization that only a tummy tuck will provide real improvement. In evaluating her for a tummy tuck, it was noted that she had a full or thicker pubis. As part of her tummy tuck, it was decided that liposuction of it should be done at the same time. 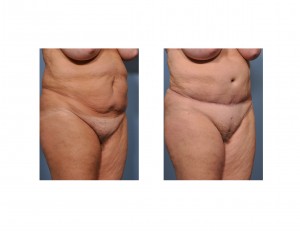 Under general anesthesia, she underwent a full tummy tuck where the excisional pattern was above the belly button. She has rectus fascial plication from the xiphoid process down to the pubis with permanent sutures. The upper abdominal skin flap was brought down to the lower one and closed. A new belly button hole was created and the original umbilical stalk brought through and shortened. The pubic area had tumescent infiltration and was then treated by liposuction, removing 55cc of aspirate. Her flanks and side of the waistline also underwent liposuction for narrowing. 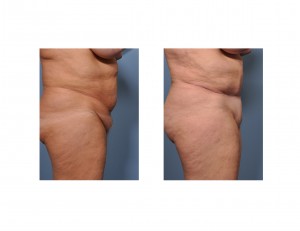 Her result showed significant abdominal improvement and a flat pubis with a narrowed waistline. Liposuction can be very helpful in improving a tummy tuck result outside the zone of tissue excision. The pubic region should be one area considered for liposuction if needed to avoid a prominent postoperative bulge below the scar line.

1) Many patients with excess and loose abdominal tissue have pubic sagging or ptosis. This area should be evaluated before tummy tuck surgery to determine if modifications should be made to include its correction.

2) While a tummy tuck will provide some pubic lift, it may not be enough if the amount of pubic sagging or fullness is significant.

3) A modification of the incisional design and/or liposuction should be added to the tummy tuck for pubic reshaping if needed.