Background: Aesthetic buttock deformities consist of two types of undesired structural changes. Inadequate volume is the far more recognized buttock problem which can occur from either inadequate natural development (or natural development that one sees an inadequate) or from volume loss due to aging or weight loss. The other is tissue sag over the infragluteal crease (known as banana rolls) which can also occur from aging and weight loss. An induced cause is a result of the sequelae from liposuction of the lower buttocks.

The treatment of lack of adequate buttock size is either fat injections (BBL surgery) or buttock implants. While fat and implants may seem interchangeable in buttock augmentation, they are not. Implants are reserved for those patients who simply do not have enough fat to do BBL surgery. When using buttock implants the decision is whether to go into or above the muscle. When placed in the intramuscular position, it is possible to combine fat injections with buttock implant surgery.

Case Study: This 48 year-old male wanted to improve the appearance of his buttocks. He had lost some weight over the past several years and his buttocks had gone flat. He also did not like the tissue overhang on the bottom of the buttocks. (the sagging) 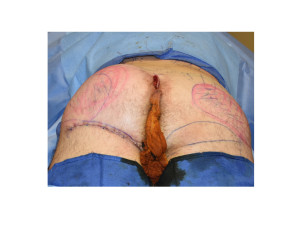 Under general anesthesia in the supine position he initially had his abdomen and flanks aspirated of fat by liposuction. Once moved into the prone position his flanks was also aspirated. Total liposuction aspirate was 1,800ccs. Once processed by filtering and washing a total of 360ccs of concentrated fat was available for injection. Through an infraguteal incision, solid silicone 270cc buttock implants were placed in the intramuscular position. A lower buttock lift was done on each side removing a predetermined strip and skin and fat. Through suturing to the muscular fascia, the infragluteal fold was remade. Lastly, 180ccs of concentrated fat was injected in various locations of the buttocks that had not been previously undermined for the placement of the buttock implants. 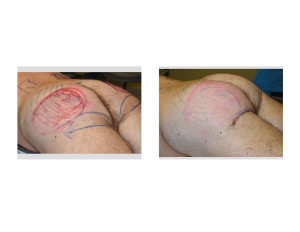 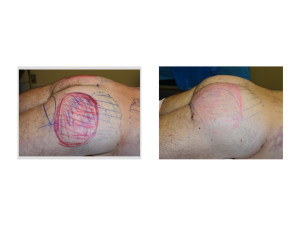 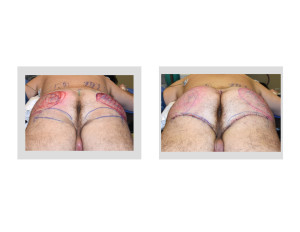 His immediate intraoperative results showed a significant improvement in the size and shape of his buttocks. While the amount of fat that will be retained remains to be determined, the contributions of the buttock implants and the lower buttock lift will be retained.

This case of buttock augmentation demonstrates the concept of the ultimate buttock makeover. Between implants, fat grafting and a buttock lift, there is no more aesthetic changes that can be performed on the buttocks at one time.

1) Genetics and aging affects the buttocks like any other body area with loss of volume and sagging.

3) Buttock augmentation can be combined with a lower buttock lift to create the ultimate buttock makeover.