Background:  Changes around the eyes is the first part of the face that shows signs of aging. The development of excess skin on the eyelids and protruding eyelid fat makes the eyelids heavy and tired looking. But the eyes do not age in isolation, above them sits the eyebrows which are not immune to the effects of time. Aging of the eyebrows is primarily seen as they fall lower, often off of the bony brow ridges.

When considering corrective eyelid surgery, the standard and very effective approach are blepharoplasties. (eyelid lifts) While effective, the best result may not be obtained if the consideration of the brow position is overlooked. Whether a browlift is also beneficial can be tested before surgery by lifting the eyebrows and seeing if it also makes the eyes and the forehead look better. If a browlift is going to be performed with the blepharoplasties, this necessitates a smaller amount of skin removed from the upper eyelids. (a browlift recruits eyelid skin upward)

Browlifts have many different options than blepharoplasty surgery. They can be done from behind the scalp through a long open incision (coronal type), small incision scalp approach (endoscopic type), at the hairline (pretrichial type) and through the upper eyelid. (transpalpebral) Which technique is used depends on how much browlifting is needed, the vertical length of the forehead skin and how much muscle deanimation of the forehead is needed. The endoscopic browlift is one of the most common methods due to its smaller incisions but still having a powerful upward lifting effect.

Case Study: This 52 year-old female was tired of people telling her she looked tired or mad. Her eyes had a lot of excessive skin and herniated fat. But her brows were also heavy, low hanging and were asymmetrically positioned. She had very thick and heavy skin throughout her face. 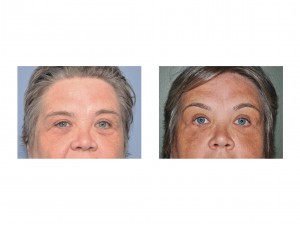 Under general anesthesia, the first procedure done was an endoscopic browlift. Through four small incisions in the central and temporal scalp, the periosteum over the brows and across the nose was released through an endoscope. Muscle was removed from the supraorbital and supratrochlear neurovascular bundles and the brows lifts and secured to the outer cortex of the cranial bone by resorbable Lactosorb screws and sutures. The upper eyelids were done next, removing less skin than originally marked to prevent any potential risk of incomplete eyelid closure. The lower eyelids had skin and fat removed and the orbicularis muscle resuspended during closure. 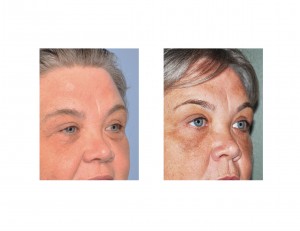 The time required for all swelling and bruising around the eyes to completely go away after surgery was three weeks. By one month after surgery she showed a significant improvement with more open and refreshed eye look…no longer having a mad or angry appearance.

Combining a browlift with blepharoplasties creates the most complete amount of periorbital rejuvenation. While the change can be dramatic, the patient should anticipate a significant period of time for a complete recovery as the eyes are visible to all and even small amounts of swelling or bruising may be noticeable.

2) Total periorbital rejuvenation consists of upper and lower blepharoplasties as well as a browlift.

3) If the forehead is not vertically long, an endoscopic browlift can raise the eyebrows without making the forehead too long.