Lip reduction illustrates a basic plastic surgery principle that it is relatively easy to make a face or body part bigger but much more challenging, and often more limiting to make it smaller. Lip reduction is performed by largely removing excessive vermilion show and keeps the scar at the dry and wet vermilion junction. Removing oral mucosa behind the vermilion is largely ineffective as a lip reduction method because mucosal tissue is very flexible and easily stretches.

Case Study: This 25 year-old African-American man felt his lips were too big and not well proportioned for his face. He wanted their protrusion reduced with less vermilion show. 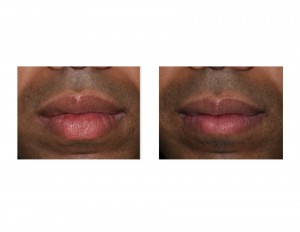 Under IV sedation anesthesia, an upper and lower lip reduction were performed through dry vermilion excision. At the central part of the lips, 8mms was removed from the lower lip and 5mms at the upper lip. The excision tapered towards the corner of the mouth but the two ends never connected or crossed the the mouth corners. 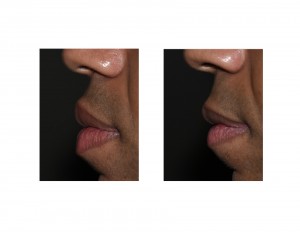 His postoperative results showed a lip size reduction that was very satisfying to him. It did take up to six months after the procedure for all normal sensation of the lips to return. The scar line at the back side of the dry vermilion was barely detectable.

While lip reduction surgery can produce a visible lip size reduction, there are limits as to how much lip size can be achieved in a single surgery. While very large amounts of dry vermilion can be removed one does want a scar line that goes beyond the height of the lip edge and becomes potentially visible. Thus it is prudent to not attempt too much tissue lip tissue removal in a single procedure.