Background: Some of the earliest signs of facial aging affect the eye area. The frequent sphincteric closure of the eyes and their thin skin ensures that aging will appear first on one’s face.  One of the inevitable eye changes is the development of extra skin on the upper eyelid. Due to the constant opening and closing of the upper eyelid, which moves a lot more than the lower eyelid, the development of stretched out skin is inevitable.

When it becomes significant enough, the extra skin will hang over the natural crease of the eyelid and eventually can hang down onto the lash line. This is known as upper eyelid hooding. The removal of this hooded upper eyelid skin is the primary objective of upper eyelid blepharoplasty, also known as eyelid tucks or lifts. With this skin removal, the overhang is removed and the natural crease or inward fold of the upper eyelid is seen again. While part of the underlying orbicularis muscle has historically been part of an upper blepharoplasty, contemporary techniques now seek to preserve it and to only remove skin.

Given the small area that eyelids occupy, it is not an uncommon request to ask if it can be performed under local anesthesia. While the use of local anesthesia for a blepharoplasty does not shorten one’s recovery from the swelling and potential bruising of the surgery, it does save anesthesia fees and the short-term issues related to having been put to sleep. The infiltration of local anesthesia can penetrate the thin tissues of the eyelid very effectively for a profound numbing and vasoconstrictive effect. 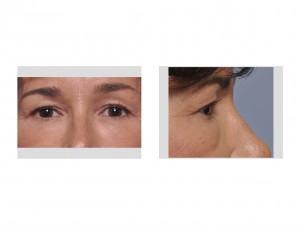 Case Study: This 50 year-old female wanted to remove her excessive upper eyelid skin. It was making her eyes feel heavy and gave her a tired appearance. She was happy with how her lower eyelids looked and only want the upper eyelid skin removed. She had numerous surgeries perform in the past under local anesthesia, including her first breast augmentation, and felt comfortable with a local anesthetic approach for the much smaller eyelid area. 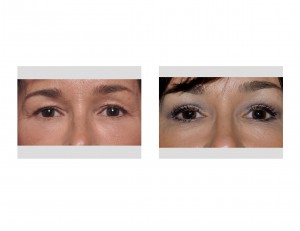 In a surgical suite setting, markings of the amount of skin to be removed were done with her opening and closing her upper eyelid to ensure that the complete skin overhang would be removed. Then 1cc of 2% xylocaine with 1:100,000 epinephrine solution was injected into each upper eyelid. Ten minutes was allowed to achieve its maximal effect which is evident by skin blanching. The marked skin was then excised, removing just a very small strip of muscle with it. Closure was done with a combination of dissolevable and permanent sutures. Only antibiotic ointment was used for dressing. 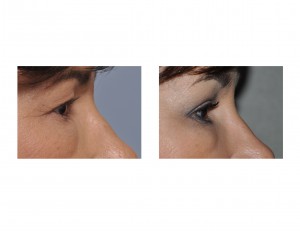 She experienced some swelling and no bruising. Her sutures were removed a week later and she missed only a few days of work. When seen at one month after surgery, she had a more open and refreshed look to her eye area.

Blepharoplasty surgery can be very successfully done under local anesthesia. But it can not be so effectively used on the lower eyelid because of constant eyelid movement with the inability of the patient to not look at the ongoing surgery. Upper blepharoplasty is done with the patient’s eyelid closed and done from above or to the side of the patient, both maneuvers which prevent the patient from potentially seeing what the surgeon is doing. Thus lower eyelid surgery or combined upper and lower blepharoplasty surgery is best done under sedation or general anesthesia.

1)      A blepharoplasty (eyelid lift) is very effective for eliminating hooding and skin overhang of the upper eyelid.

2)      An isolated upper blepharoplasty can be comfortably done under local anesthesia for many patients.

3)      Recovery from upper blepharoplasty can be very rapid and one looks reasonable in 7 to 10 days after surgery.