Background: Upper blepharoplasty surgery, more commonly known as an eyelid lift, is the most common cosmetic eyelid surgery. It is tremendously effective and is associated with a very low risk of complications. While eyelid tissue is very thin and swells significantly after surgical manipulation, the recovery is fairly quick. The results of blepharoplasty surgery is sustained for years although its results are not permanent.

Blepharoplasty surgery is commonly done as part of other aesthetic facial surgeries such as facelifts and browlifts. As a result the swelling and bruising is seen as significant in the context of the overall face and the recovery is comparatively prolonged. But this composite facial rejuvenative surgery belies the otherwise relative ‘simplicity’ of the upper blepharoplasty procedure.

The upper blepharoplasty procedure relies on skin and some orbicularis muscle removal to create its effect. There is a debate as to whether any muscle should be removed along with the skin removal and its effect is primarily believed to help redefine the upper eyelid crease. Proper marking and not excessive tissue removal are the keys to an uncomplicated and satisfactory upper eyelid lift.

Case Study: This 42 year old female felt her upper eyes were getting tired and heavy. She felt she had developed some hooding of skin that no amount of eyelid creams or Botox injections around the eyelids could solve. 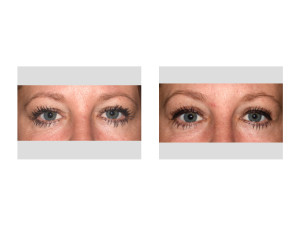 Under local anesthesia injections into the upper eyelids, a tapering 7mm crescent of skin and muscle was removed along presurgical markings made with a caliper. The tissue segments were removed by scissors which minimized any bleeding. Small dissolveable sutures were used to close. 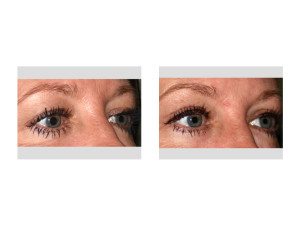 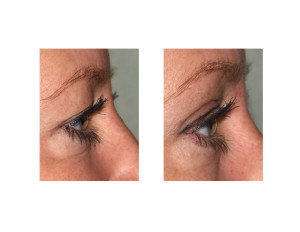 Within one week after surgery she looked essentially no-surgical and had no bruising. Most of her upper eyelid swelling was gone by ten days after surgery. She described the experience as relatively painless and had no discomfort during the procedure and even afterwards.

An isolated upper blepharoplasty can be comfortably and safely performed under local anesthesia in the office. Its effects are immediate and the recovery is very short. Such an office procedure provides the most economic approach to having an upper eyelid lift done.

2) An isolated upper blepharoplasty can be safely and comfortably performed under local anesthesia as an office procedure.

3) An upper blepharoplasty has a quick recovery with only moderate swelling and bruising.