Background: The excision of loose skin and fat through a variety of lifting are common body contouring procedures. While usually done after large amounts of weight loss, many such excisional procedures are done for the abdomen, waistline, chest, arms and thighs. Back lifts are also done and have been described as braline lifts, back roll excisions and flank lifts. The one feature that everyone of these body lifts has is that that involve long linear scars as a tradeoff to create their effects.

Back lifts are one of the most infrequently done of all the body lifts. They typically involve the removal of loose skin which is refractory to ljposuction and creates horizontal and oblique skin rolls. One area that is a frequent patient problem is that of skin rolls in women that stick out above or below their bra due to excessive tissue along the chest wall and into the back. They are typically treated by the braline lift which involves excision of  tissues in a horizontal orientation from the back extending to the side of the chest wall. The linear scar is intended to be placed inside the bra so that it remains covered in clothes.

But the presence of a horizontal back scar may not be seen as a favorable trade-off for some women, particularly those who are not extreme weight loss patients. While a scar is unavoidable to get rid of loose chest wall and back skin, an alternative strategy is the vertical back lift. Its concept is that tissue will be removed perpendicular to the loose tissues and the scar will run down the middle of the back over the spine.

Case Study: This 35 year-old female had recent rib removal surgery to better contour her waistline. After this surgery she wanted to get rid of loose skin that bunched up over her bra and created an unsightly protruding skin roll. This area had been treated by liposuction but that provided minimal improvement. 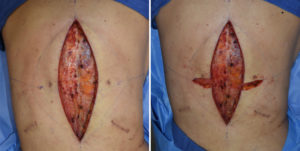 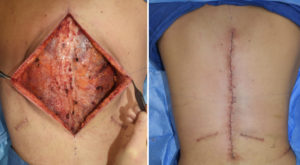 Under general anesthesia the area of loose chest wall and back skin was marked by pulling it together over the skin to determine the maximal amount of tissue to be removed as well as the vertical extent of the incision. An initial vertical ellipse of skin and fat was removed exposing the fascia of the back muscles. The skin was widely undermined on both sides out to the side of the chest. Central pilot cuts were made to determine how much more skin could be removed and still come together in the midline. The additional skin was removed and the back then closed in a single midline incision line. 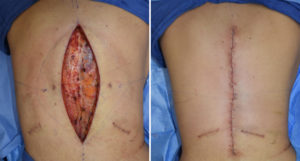 Her intraoperative result from the vertical back lift produced a significant tightening of her torso and got rid of the loose skin and rolls along her braline. How much tissue movement she got could be appreciated in how much inward movement occurred of her recent rib removal scars. (at this was at the low end of the excision so double that amount occurred at the central braline location

The trade-off for a vertical back lift is the midline back scar. It can have a powerful effect on torso tightening. Whether the vertical scar is a good trade-off has to be determined on an individual patient basis.

1) Skin rolls along the chest wall and bra line in females is traditionally treated by a horizontal braline lift.

2) The vertical back lift addresses the chest sidewall tissue problem through a strong tissue pull from a remote excision perpendicular to the direction of the skin rolls.

3) The vertical back lift is a unique body contouring procedure because it treats the loose skin by relocation rather than direct excision.