Background: Facial beauty is well known to be highly influenced by proportions and symmetry. Dividing the face into thirds, in either frontal or side views, is an established method of determining vertical facial balance. While this beauty concept is well acknowledged, putting it into practical use is difficult. Few facial structures can be easily changed vertically unlike increases in projection (horizontal) or transverse width.

The only facial structure that can easily be changed in the vertical dimension is the lower third of the face, that of the mandible. Such vertical mandibular lengthening is most commonly done through orthognathic surgery by mandibular advancement, either alone or in conjunction with maxillary downgrafting. But onlay augmentation can also be done along the inferior border of the mandible. (jawline It is not commonly done or thought of as there are no stock implants available that make it easy to do. 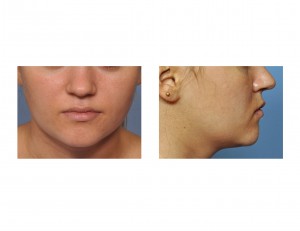 Case: This is a 21 year-old female who was concerned about her jawline, specifically that it was not long enough. She wanted a longer and more pronounced jawline. Her face was overall wide in all thirds including the jaw angles. She had wide-set eyes (type 1 hypertelorism) that were quite prominent with a lot of scleral show. But her lower face was vertically short with a small mouth horizontally. She had adequate horizontal chin projection but was short between the lips and the pogonion chin point.

A decision was between working with existing stock mandibular/chin implants or having a custom mandibular inferior border implant. Due to cost considerations ( doubling the cost of surgery), it was elected to proceed with off-the-shelf implants. One of the problems with this approach is that there is not a true mandibular border (jawline) implant. However, the geniomandibular implant composed of Medpor closely parallels this concept as it does lengthen the inferior border of the mandible (by 4mms) back to the mid-body of the mandible in most patients. By placing a spacer between the inferior border groove of the implant and allowing it to go back further and provide a taper, a modified jawline implant can be made out of a stock implant. This approach works if the implant is not needed to extend all the way back to the mandibular angle. Such a design is probably better for a female than a male who may need angle lowering as well. When combined with a mandibular angle implant, total jawline elongation can be obtained. 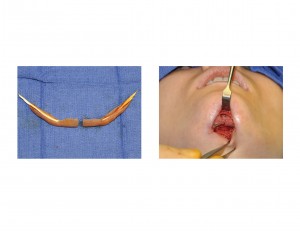 During surgery, a 3mm strip of Gore-Tex was added along the inside of the implant to get additional vertical length as well as extend how far back the implant would go. Through a submental incision, the implant was inserted and secured at the chin area with titanium screws. This implant can be placed without any risk of injury to the mental nerve as dissection is done below the exit of the nerve from the bone. 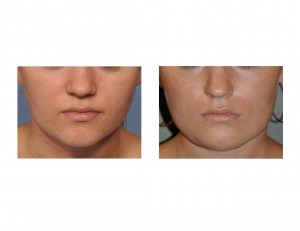 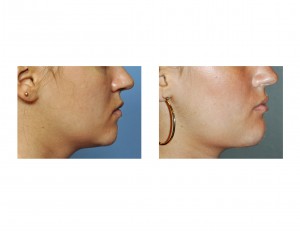 When seen at one week after surgery, the submengtal tapes were removed. She had minimal bruising and remarkably less swelling than one would anticipate. She has no restrictions on eating or jaw movement after surgery. While there was pain, it was less than what she thought would be. The implant can be seen to add to her vertical facial height without being excessively long.

1)Facial balance is a three-dimensional concept. The vertical dimension of the face, unlike horizontal projection and transverse width, is the least able to be changed and the most difficult historically.

2)Vertical elongation of the face for aesthetic balance can only be practically be done by changing the length of the mandible.

3)Aesthetic elongation of the mandible is done by onlay implant augmentation along the inferior border. This can be done using modified stock implants or having a custom implant made off of mandible model fabricated from a patient’s 3-D CT scan.