Background:The shape and projection of the chin is an important facial feature. As the chin sits as a prominence on the lower edge of the face, it has multiple dimensions associated with its shape. While commonly perceived as having only a horizontal component to it, and treated most commonly with an implant if it is too short, this overlooks its vertical and width dimensions. Chins can also be too vertically short or long as well as too wide or too narrow.

The lower face, of which the chin is a significant component, should ideally make up 1/3 of total facial height. When the lower face is vertically short, it is almost always because the bony height of the chin is too small. There are some uncommon exceptions, such as a small maxilla where the lower jaw over rotates with a resultant malocclusion, but this is easy to spot. The vertically short chin can occur regardless of its horizontal dimension presenting with either microgenia, normal chin projection or macrogenia.

The chin that is too vertically short is commonly seen in combination with some degree of horizontal deficiency. The amount of vertical and horizontal shortness determines whether an implant or an osteotomy is the better treatment. With just a few millimeters of deficiency in either dimension, an implant can readily treat both with good positioning on the lower end of the chin bone and proper implant style selection. Anything more than a minor deficiency is best treated by a lengthening osteotomy. 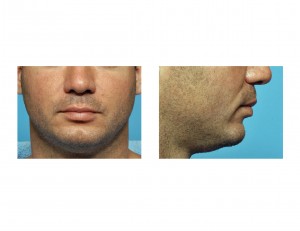 Case Study: This 35 year-old male wanted to improve his ‘weak’ chin. On examination he had both a vertical (8 to 10mms) and horizontal (5mms) chin deficiency. This made his lower face look short and gave his chin a short squat appearance. Computer imaging confirmed that a vertical chin lengthening procedure would improve his facial aesthetics. 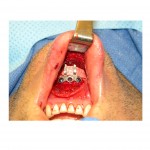 Under general anesthesia, a horizontal chin osteotomy was done through an intraoral approach. The downfractured chin segment was vertically lengthened by 8mms and brought forward 5mms. It was held into position with a modified step titanium chin plate to create these dimensional changes. A hydroxyapatite block was shaped with a burr to create a wedge fit between the upper and lower chin segments. It was put in place after the chin segment had been stabilized by the plate. The mentalis muscle was reapproximated over the plate-bone-block chin construct and the mucosa closed. 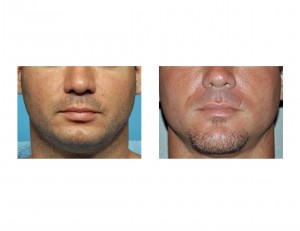 After a chin osteotomy, considerable swelling ensued which took close to three weeks to return to a more normal appearance. The lower lip had some temporary numbness which was expected and the chin felt very stiff and unnatural for about a month after surgery. It took a good six weeks until the chin felt more normal and a natural part of his face again. 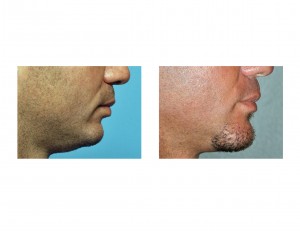 While the improvement in the chin’s appearance was immediate, critical analysis at 3 months after surgery showed the final result. He had complete return of all feeling and lower lip and mentalis muscle movement at that point. In seeing him at two years after surgery, the improvement was maintained as expected.

1) The second most common chin deficiency is in the vertical dimension. It can be seen in both the frontal and profile views and will likely have a horizontal problem as well.

2) The only method for significant vertical lengthening of the chin is an osteotomy with or without an interpositional synthetic graft.

3) Vertical chin lengthening can be combined with other dimensional movements including horizontal advancement and width narrowing or expansion.