The typical woman who seeks a more narrow waistline is often very thin without much body fat. Often they have tried liposuction or even a tummy tuck to narrow their waistline without success. They feel they look like a boy with a straight outer profile to their torso. What they seek is an indentation at the anatomic waistline level that helps create more of an hourglass figure. At the least anything other than a straight line at the waistline is desired.

Rib removal surgery for waistline narrowing is a very uncommon plastic surgery procedure. It is pursued by those women who are willing to go to a radical solution for their body contouring needs. Because of its rarity and scant information about the procedure, it is often viewed by patients and surgeons alike as ‘dangerous’ and one having a high level of risk associated with it. In reality the subtotal removal of ribs located low on the ribcage is neither dangerous or associated with adverse medical concerns.

Case Study: This 30 year female wanted to have a more narrow waistline. She was very thin and had a very low percentage of body fat. She had previously been through a  tummy tuck to help narrow her waistline which did not have the desired effect. She now wanted to seek rib removal surgery to achieve a more narrow waistline. She had a prior history of spinal fusion surgery with a well healed midline scar down the lower half of her back. 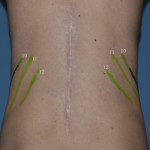 While undergoing other body contouring procedures under general anesthesia, she was placed in the prone position for the rib removal surgery. A 5 cm incision was placed in an oblique orientation over the midportion of the 10 rib. Ribs #11 and #12 were completely removed while rib #10 had a 2 cm portion of bone removed from its midportion. This allowed the remaining distal portion of the10th rib to be passively moved inward. Exparel long-acting local anesthetic was injected both an intercostal nerve blocks as well as injecting it directly into the muscle around the ribs. 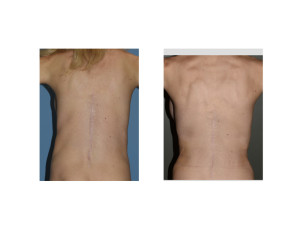 At just one week after the surgery, the change in her waistline could be seen. Some bruising was still evident around the incisions. She did not report any undue amount of pain over the rib removal areas.

3. While often viewed as a dangerous surgery, rib removal surgery for waistline narrowing is not as the  ribs are well below the apices of the lungs.