One of the most difficult problems to improve, let alone solve, in cosmetic plastic surgery is that of cellulite. It is particularly frustrating given that there are large numbers of women who are afflicted with cellulite and would love to invest in an effective treatment. While there have been a significant number of  device-based technologies over the past decade, none have lived up to their expectations and most have failed to produce a good return on a patient’s investment. 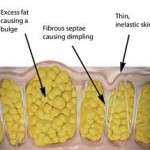 Cellulite is comprised of numerous anatomic elements that create the classic orange peel appearance which makes it easily recognized and disliked. The first defect is an overall undulation of the fatty tissue. The second known issue is the contraction and hardening of the vertical fibrous septae which causes the skin to be inward creating the overlying dimpling effect. Thirdly, the skin is usually thinner and weaker and this allows the fat to herniated upward. For a cellulite treatment to be truly effective, it has to address all three of these tissue elements.

One of the more promising cellulite technologies is Cynosure’s Cellulaze. This uses a side-firing 1440nm laser delivered through a fiberoptic cable. This wavelength has a great affinity for fat. It has many similarities to the more well known Smartlipo used for fat reduction which uses a forward-firing laser. By firing to the side, the laser can be directed in many directions including downward, sideways and upward by simply twisting the cannula. This is important since cellultite is a problem that is not just isolated to one tissue plane.

The Cellulaze laser treats the three components of cellulite with its 1440nm wavelength. By turning the cannula downward, energy is delivered to smooth the uneven fatty base. Turning the cannula 90 degrees, parallel to the skin’s surface, the laser can be used to  cut and release the vertical fibrous septae. When the cannula is turned upward the underside of the skin is heated, stimulating the growth of new collagen and elastin.

While Cellulaze is currently marketed and sold in Canada, Europe and Australia, it is awaiting FDA approval in the U.S.  In a clinical study conducted in the U.S., a single treatment for thigh cellulite was done. At evaluations at one, three, six and twelve months after treatment, measurements of skin thickness and elasticity showed significant increases at each visit. Patient satisfaction was high with minimal side effects other than expected amounts of swelling.

It is likely that Cellulaze will receive approval sometime in 2012 in the U.S. Many prospective patients will be anxiously awaiting.