Cellulite: Searching for an Effective Treatment 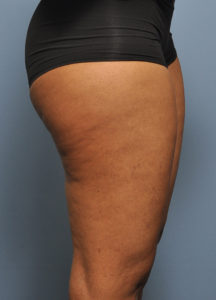 Much like scars and stretch marks, the problem of cellulite is common and questions as to how to treat it equally so. Cellulite remains, however, an aesthetic problem that defies a single effective answer. The testament to that can be seen on the internet with hundreds of cellulite treatments and ‘cures’. I have always held to the theory that if many options exist to treat a problem, probably none of them work well. If one single treatment method was good, we would all know about it….and there would only be one treatment method, not hundreds. The large number of cellulite treatment methods exist for one simple reason…..hope. When results aren’t available, hope is the next best sales method!

The problem of cellulite is fairly well understood. These are pockets of enlarged fat that are trapped between fibers (septa) that run between the skin and the underlying tissues. The fat pockets become enlarged, due to fluid retention from lymphatic obstruction, and creates that ‘quilting’ effect much like the surface of a spring mattress. It is a phenomenon that is common in women but rare in most men. The hormonal differences have been blamed as a cause although this has never been conclusively proven. It most commonly occurs on the thighs and buttocks.

Treatment options have been plentiful but can be divided into topical creams, various forms of lymphatic massage/manipulation, and surgery. Despite many grandiose claims, few topical treatments have ever been shown to create a significant improvement. Creams containing aminophylline (an asthma medication) have been most promising, but the rest mainly moisturize and soften the skin. If they have any effect, it is likely due to the luffing or sponging of the area which is often done as part of the at-home treatment. Lymphatic massage, particularly mechanized methods such as Endermologie, definitely produce visible results, albeit temporary. By using rollers under suction, the skin is lifted, the fibers disrupted, and fluid drainage from the fat encouraged. When on a long-term program with maintenance treatments, good results are consistently seen. The only question is…..is the effort (time and money) invested worth what is achieved for not a permanent result. Most recently, a minimally-invasive procedure called Carboxytherapy, appears promising. By injecting carbon dioxide under pressure underneath the skin, the cellulitic fat is remodeled and reshaped. While promising (maybe very hopeful), long-term results and studies need to be done before we jump on this bandwagon. Surgery, specifically liposuction and a method called pickling, have not panned out to be worth the effort. Liposuction of an area with cellultite can make it look even worse if not done conservatively and at a deep level. Pickling is a surgical method where a small tube with a sharp end is run under the skin to cut the fibers loose from the underside of the skin, making it smooth. While initially promising years ago, the results are not long-term and certainly not worth undergoing surgery to do.

While the search for a cellulite cure continues, non-surgical options are best although only temporary. They cause no harm, the question is merely are they worth the expense.