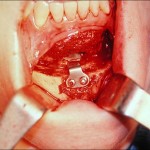 CHIN ADVANCEMENT THROUGH OSTEOTOMIES: WATCH OUT FOR THE MENTAL NERVE

Using cross-sectional anatomic studies of the bony course of the inferior alveolar nerve, significant insight to the execution of osteotomies of the mandibular symphysis (chin) can be obtained. The relatively simple horizontal osteotomy of the anterior mandible (chin) is a very versatile technique for multiple improvements in the shape and projection of the chin and lower face.

An integral part of this procedure is the horizontal angulated cut, usually performed with a reciprocating saw, that goes below the easily identified mental foramen. While some limited postoperative disruption of the nerve’s sensory distribution (feeling) is to be expected due to the dissection, the incidence of permanent numbness of the mental nerve is thought to be very low.

It is historically believed that the course of the inferior alveolar nerve comes directly out of the mental foramen in a straight horizontal projection from its posterior course. This is how it is depicted in most textbooks and anatomic drawings. However, its neurosensory supply goes anterior to the 1st premolar tooth and this may account for the anterior loop that has been discovered in anatomic studies. I have always assumed this direct horizontal nerve exit and usually keep the bony cut only several millimeters from the foramen. In this way, the pedicled inferior bone flap (chin segment) is as large as possible, regardless of the angle of the bony cut. A detailed anatomic study shows that this technical approach, however, may expose some nerve branches to irreversible injury. I have now modify my technique accordingly with a minimum of 4 to 5 mms below the foramen when performing this cut. This should avoid any potential for permanent numbness of the lip or chin and still leaves an adequate amount of bone for plate and screw fixation.