With the tremendous increase in the number of bariatric surgeries performed in the past five years, to no surprise there has been a near equal increase in the number of post-bariatric body contouring procedures performed to deal with the resultant excessive hanging skin. These bariatric plastic surgery procedures include arm lifts, breast lifts, abdominoplasties, thigh lifts, buttock lifts, and the circumferential body lift. 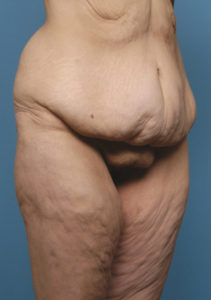 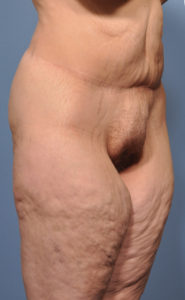 If the patient has a midline vertical scar from an open gastric bypass procedure, then the body lift is combined with a ‘vertical wedge’ cut out along this midline scar. This helps produce some horizontal waistline tightening which, without it being done, would not happen as much. If the patient doesn’t have a vertical midline scar then I rarely do this as part of the body lift so as to not make more scar than the patient will already have.

One thing the body lift can not do is to increase the size of the buttocks. Most massive weight loss patients will develop a very flat buttock appearance. While there have been some variations of the body lift touted as taking the excess skin and fat from the back and using it as a ‘buttock implant’, this rarely produces enough bulk in the right place of the buttocks to make it worthwhile. And there are some risks in doing this as part of the body lift procedure. I tell my patients to think about buttock augmentation as a later procedure. It is likely that this concern will fall off the list for many patients over time.

The most significant complications that I have seen in body lift patients are fluid collections (seromas) and wound separations (in the front at the inverted T if a midline wedge is cut out and at the back just above the gluteal cleft). I tell every patient that the likelihood of these issues is very high and most patients will develop some variations of one or both of them. Fortunately, they are managed not by further surgery but by needle aspirations and dressing changes until they heal themselves. These issues always occur, not early, but between 2 to 4 weeks after surgery. If you reach a month after surgery without any of these common problems, then they are not likely to occur.