Evaluation of the Safety and Effectiveness of the Circumferential Body Lift

The large amount of obesity isn America has created the need for bariatric surgery over the past two decades. With large amounts of weight loss has come the resultant excess skin issues which poses their own set of medical and personal hygiene and self-image issues. A number of bariatric plastic surgery procedures have been developed and modified over the years to manage the loose and sagging skin over the trunk and extremities. 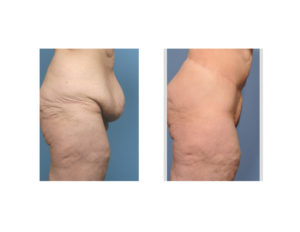 What is fundamentally unique about many of the these bariatric plastic surgery procedures is the large body surface areas that they cover and the length and extent of surgery to treat them. This is on top of any underlying medical issues that a weight loss patients may have. Together this has created a known high rate of complications after this type of body contouring surgery. The circumferential body lift is the most extensive of these types of procedures and any series that reports their experience its noteworthy to define the effectiveness and risk of the circumferential body lift.

In the June 2017 issue of the journal Plastic and Reconstructive Surgery an article was published entitled ‘Safety of Outpatient Circumferential Body Lift: Evidence from 42 Consecutive Cases’. In this paper the authors review their experience in this type of body contouring surgery over a six year period looking at complications and the occurrence of revisions. Of note on their technique and protocol; the posterior lift was performed first in the prone position, a urinary catheter was not used, the anterior portion was performed with liposuction of the epigastric area and a diastasis repair, and drains were used in both the back and front. No drug prophylaxis for DVT was given but sequential compression devices were used during surgery with compression stockings after surgery. The vast majority of the patients were female (41 out of 42) with an average weight loss off over 120lbs. A few patients (12%) had the fleur-de-lis modification to the front tummy tuck part of the body lift. Total average operative time was just over 2 1/2 hours.

The overall complication rate was 36% with the vast majority related to what would be expected in a large body surface area operation with a long incision…wound separation (24%) and seromas. (5%) The wound separations occurred usually over the sacrum which is both common and expected. The revision rates were 26% and were usually done for scar revisions. There were no adverse medical events including deaths, DVTs, hematomas or the need for hospitalization for any reason.

This paper supports that circumferential body lift surgery is both safe and effective and can be done in an outpatient facility. Overnight observation is useful particularly in patients that do not live close to the site of surgery. High satisfaction rates are typical for this type of operation, even with complications, given the dramatic changes that result and the lack of any other alternatives to solving the large amount of loose and sagging skin.