The dominant feature of either upper or lower lip is that of the cupid’s bow. It is really the only non-linear feature of the lips. The resemblance of the double curve of the upper lip to a bow laying on its side is obvious. While peaks of the bow could resemble any bow, it presumably refers to the Roman god of love, Cupid, because of the potentially sensuous nature of the lips. They develop as a result of the fusion of the prolabial process and the lateral lip elements in utero.

The strength of the shape of the Cupid’s bow varies greatly amongst different people and is related to overall lip size. Larger lips are more prone to have a prominent cupid’s bow while thin lips often had little evidence of one. Great effort is made by lip injection techniques to make a more prominent bow and several surgical procedures exist as well to help create it. (lip lift, lip advancement) 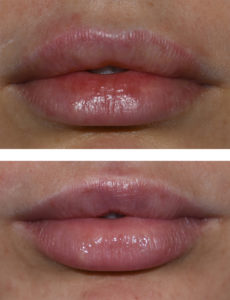 But there are some women who want to have a less prominent cupid’s bow and an upper lip with a smooth vermilion-cutaneous across its arc from mouth corner to mouth corner. A cupid’s bow reduction procedure can be done by excising a small elliptical segment of skin between the bow peaks and the vermilion advanced upward. While very straightforward to do, the effects of gravity and tissue contraction do potentially work against its effectiveness. Fortunately the vermilion of the lips are flexible and do permit more stretch than of the surrounding skin.

The biggest concern, beyond effectiveness, is whether there will be adverse scarring from a cupid’s bow reduction procedure. As this case illustrates the scarring is very minimal and barely if at all perceptible. Should there be visible scarring it is also a procedure which is easily revised since it is done in the office under local anesthesia.