« OR Snapshots – Stacked Chin Implants
Shoulder Narrowing By Clavicle Reduction Osteotomies – Does The Recovery Compare To That Of Clavicle Fractures? » 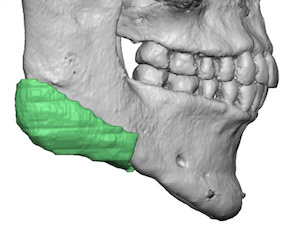 While the chin has been a focus of lower facial reshaping for over half a century, it really only represents 1/3 of the total jaw surface area. While its surface area involvement is relatively small it has greater aesthetic significance to the face than the amount of bone area that it occupies due to its projecting central location on the lower face. For his reason many different techniques for chin augmentation have evolved including a large number of implant options.

Unlike the chin the jaw angles occupy much greater amounts of surface area of the lower jaw due to their bilateral presence. Despite having much more bone and muscle tissue involvement they have not historically drawn as much aesthetic attention. Part of this is due lack of aesthetic value recognition, which is far greater today, and the other reason is due to the limited jaw angle implant styles/sizes that are available to augment this part of the lower jaw.

Unlike the chin the jaw angles are much more aesthetically challenging to successfully augment. Their bilateral presence with the common occurrence of differences in their shapes between them increase the risks of postoperative implant asymmetry…particularly with the use of standard implant shapes. This makes the use of custom designed implants for the jaw angles very appealing for some patients. 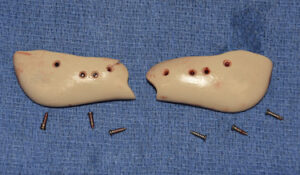 In the August 2020 issue of the Journal of Craniofacial Surgery an article was published own this topic entitled ‘Mandibular Angle Contouring Using Porous Polyethylene Stock or PEEK-based Patient Specific Implants. A Critical Analysis’. In this paper the authors  compare outcomes between using standard vs custom jaw angle implants. The standard implants used were composed of Medpor (porous polyethylene) from commercial providers. (12 patients) The custom implants were made of PEEK material based on designs from the patient’s 3D CT scans. (9 patients) Surgical time and complications were compared between the two jaw angle implant methods.

The surgical time was 15 minutes less for the custom implant surgeries and intraoperatively only the stock implants needed modifications. Postoperative infections occurred in both groups with no significant differences. The custom implants achieved greater levels of facial symmetry than that of the standard implants.

It is no surprise that a custom design approach offered greater ease of intraoperative placement and less risk of postoperative implant asymmetries than the use of standard shaped implants. It is never a question as to whether a custom design approach is better….as it always is in a bilateral facial structure…but whether the added cost justifies the benefits/lower risk. That would depend on the patient’s inherent jaw angle shape, whether significant bony asymmetry is present, the type of jaw angle change desired and the surgeon’s experience with this type of facial implant surgery.