There are may women who are not happy with the appearance of their inner thighs. But when significant weight loss has occurred after dieting or bariatric surgery, the inner thigh can develop considerable loose skin which is maximally unaesthetic in its appearance. This is the most common patient in which an inner thigh lift (medial thighplasty) is done.

The inner thigh lift can treat varying amounts of loose tissue and there are a variety of patterns of skin and fat excisions that can be done. These patterns include horizontal, short vertical and long vertical inner thigh lifts. The pattern of excision chosen is based on the location and extent of the loose tissues and how much of the length of the inner thigh is involved. Despite inner thighs being now more than ever before, it is the one body contouring procedure which is probably written about and critiques the least. 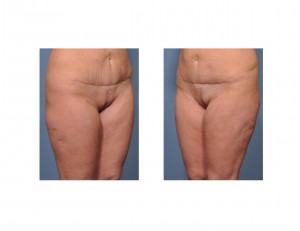 For those plastic surgeons that have performed more than just a few inner thigh lifts, this study really rings true. Inner thigh lifts are associated with a high rate of complications and some degree of suture line dehiscence is the norm and not the exception. It is only a question of how big the separation will be and how long it will take to heal. To no surprise, the more extensive the inner thigh lift is (the longer the scar) the higher the rate of potential complications. It is a bit surprising that liposuction also increases the rate of wound dehiscences. But probably not surprising when thought about biologically since it traumatizes the skin flaps and disrupts lymphatic outflow.

Why do thigh lifts have such a rate of wound problems compared to other body contouring procedures? It simply is the location of the incisions are in an area of the body that is exposed to a lot of stress and shearing on the wound closure. It is also over an area of a density of lymph nodes (inguinal lymph node basin) which make sit prone to seroma formation.