In the Online First edition of one of the 2013 issues of the Aesthetic Plastic Surgery journal an article was published entitled ‘Surgical Pocket Location for Gluteal Implants: A Systematic Review’. In this paper the authors reviewed the medical literature of all articles published on buttock implants in plastic surgery journals from 1969 to 2012 of which thirty articles were found. The goal was to determine the outcomes from different pocket locations including acute and chronic complications such as wound dehiscences, wound infection, seroma, hematoma, implant asymmetry, and capsular contracture. This study conducted a systematic review to derive evidence-based recommendations concerning the safest type of pocket location including submuscular, subfascial, intramuscular, or the intramuscular XYZ method.

The most common complications from buttock implant surgery were wound dehiscences (10%), seroma (2.5 %), wound infection (1.1 %), and hematoma (0.25 %). Satisfaction rates after surgery with the different pocket locations was not specifically studied and involved too many different types of implants and sizes to allow for any comparison between pocket locations. 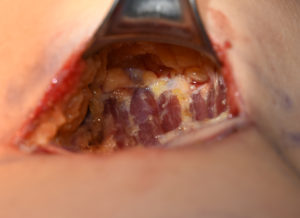 This study confirms what button implant surgeons have known for a long time…the subfascial location is associated with a higher incidence of potential complications…and it is not even close. It proves once again a very basic implant principle that the more vascularized tissue that covers the implant, particularly muscle, the much better it is both in the short and long term in avoiding problems. But because intramuscular buttock implant is technically harder to perform and fewer surgeons do it, subfascial implant placement remains the most common pocket location used.

The dilemma is, however, that pocket location also affects buttock implant size. You simply can’t put as big an implant in the intramuscular pocket as the subfascial one. And this poses a difficult aesthetic choice for many patients as well as one for the surgeon as well. On the hand the surgeon wants to please the patient and not have them undergo an operation after which they are not satisfied. Conversely, the surgeon also does not want the patient to suffer a complication that could potentially result in removal of the implants either. 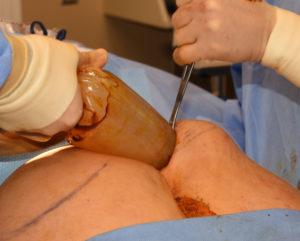 In a contemporary world where buttock enhancement surgeries have risen to levels of procedures being done never seen before (due to fat grafting), the number of patients who are also presenting for buttock implants has correspondingly risen. ‘Failed’ BBL (Brazilian Butt Lift) surgeries or patients who do not qualify for them have increased the numbers of patients being seen that present the challenge of picking the buttock implant pocket location that strikes a balance between implant size, risks of complications and recovery. It is also led to newer techniques to try and reduce complications such as the funeral insertion method for buttock implants.