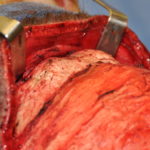 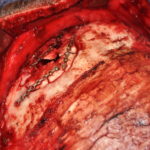 As a result, the brow bone reduction technique needed for most men is the well known bone flap technique. This is where the outer table of the frontal sinuses (brow bone protrusion) is removed, reshaped and then reimplanted. This method produces the most significant amount of brow bone backward movement as there is almost no reasonable limit as two how much the bone can be moved back into a frontal sinus air space. This is different than when a bone burring method is used which is limited to the thickness of the anterior table of the frontal sinus. 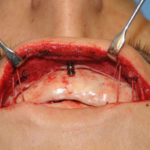 While the need and the technique for a bone flap setback technique is straightforward in men, the location of the incision and the resultant scar are major considerations as an acceptable tradeoff. Many men have either short hair, receding hairlines or are completely bald and the use of a traditional coronal incision must be thoroughly discussed before surgery. For some men they may feel that such a tradeoff is worth it. But some men may forego the operation when faced with that choice. In males with reasonable deep horizontal skin wrinkle lines or scars, a brow bone reduction can be done more directly. In so doing a nerve-sparing technique can usually be done without inhibiting the ability to remove and replace the bone flap.

Given the difficult decision of the incision location in many men, preoperative consideration needs to be given to a different ‘brow bone reduction’ technique. Evaluation of the slope of the forehead above the brow bones should always be considered. This investigates the question of whether the brow bones are merely protrusive, whether it is really the forehead that is too retroclined or it is a combination forehead shape issue. Preoperative computer imaging needs to be done to help the patient see what looks best with changes in brow reduction, forehead augmentation or both procedures combined.

This preoperative profile evaluation avoids a misdiagnosis (pseudo brow bone protrusion) and an unnecessary brow bone reduction operation. Beyond the aesthetic outcome, the relevance of this preoperative consideration is that a forehead augmentation can be done far simpler with less scar, particularly when a computer designed forehead implant is used. At the least, the male who is understandably concerned about adverse visible scarring may opt for a camouflage forehead augmentation particularly if they are are unable to see a significant difference between the two predicted operation outcomes.