Considerations for Breast Augmentation in Bodybuilders

Breast augmentation is not an uncommon request amongst women who are enthusiasts for bodybuilding and fitness activities. This extreme fitness activity can cause loss of any residual breast tissue as muscle mass is increased and body fat is lost. This is particularly relevant for those women who didn’t have much breast tissue naturally. When combined with a more pronounced pectoralis muscle outline and profile, the appearance of a defined breast can be completely lost or largely obscured.

Female bodybuilders have understandable concerns about breast augmentation since it is surgery on the pectoralis muscle. Common questions include where should the implant be placed, how soon can one return to working out, and will it ultimately affect muscle strength and development. 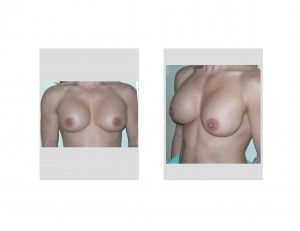 There are good arguments to be made for placing breast implants either above or below the muscle. In the day (pre-2007) when only saline implants were available, I would recommend placement under the pectoralis muscle. This was because the appearance of the implant was better due to less visible rippling. But now that silicone gel implants are available again, the issue of rippling when placed on top of the muscle is far less significant. There is a slight edge in benefits to an under the muscle position due to less risk of early implant infection and long-term capsular contracture. (hardening of the implant) But the recovery is quicker and the attachments of the pectoralis muscle are not disrupted if placed on top of the muscle.

The one aesthetic consideration in a body builder about an implant placed under the muscle is the bouncing of the implant or flattening of the breast mound when the pectoralis muscle is flexed. While this perfectly normal and causes no harm to the implant, it may be a visual issue in competitive events or just simply cosmetically disturbing.

Regardless of the position of the implant, there must be an incision somewhere to get it there. Generally, I use an incision in the inframammary fold under the breast for silicone implants and an armpit (axillary) incision for saline implants. In a bodybuilder, however, I have concerns about an armpit scar. Because of their frequent wear of sleeveless clothing, a scar in the armpit may be seen. While an armpit scar is small and heals quite well, this is always a concern in the bodybuilding patient.

Breast augmentation patients may return to cardio in one week after surgery and they can start lifting with light weights after two weeks. Chest exercises with heavy weights should be avoided for the first month. This will give the pectoralis muscle plenty of time to heal. In the first days to week after surgery, arm range of motion exercises (without weights) should be aggressively done. This will help one get back to normal faster and lessen the amount of discomfort that occurs. I have had a few bodybuilding patients tell me they were back to bench pressing in two weeks, and although I would not endorse it, does not surprise me given the conditioning of the pectoralis muscle they had before surgery. In addition, while a few of the lower attachments of the muscle to the sternum have been released, the insertion of the muscle is left largely undisturbed. This would also account for why there is no evidence that the ability to grow the muscle and increase its size and power is unaffected by submuscular breast implant surgery.