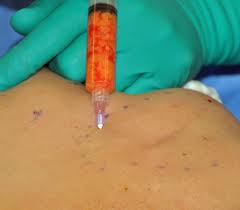 Reshaping faces and body through a ‘recycling’ approach by fat transfers is not necessarily a new technique. Fat grafting has been around for over 100 years but never gained much popularity until the past decade. As new techniques and research have revealed insights into how to improve the survival of fat grafts, the regenerative capabilities of the fat cell and its accompany growth factors and stem cells has become realized. But it is a very technique-sensitive procedure that is still plaqued by cell survival and volume retention issues.

In a recent published article in the March/April 2013 issue of the magazine MedEsthetics, Dr. Barry Eppley and other physicians skilled in fat transfers were interviewed about how to achieve safe and aesthetically fat grafting outcomes. On many important fat grafting issues, Dr. Eppley made the following statements.

‘The fact that fat is a natural and that most everyone would love to give some up does not make injectable fat grafting a completely reliable treatment method. It is important to understand that the biologic behavior of fat cells and the stem cells that accompany them is not well understood. The techniques we use are based on what we know today – and that will likely change significantly a decade from now.’

‘Fat that is being removed for transfer must be handled differently than fat that is being removed and discarded. Most doctors believe that low-pressure vacuum extraction perserves fat cell structures and improves their viability after transfer. Whether this is done through syringe extraction or a traditional liposuction machine that generates less then 720mm/HG (- 1 atm) negative pressure depends on how much fat is needed.’ 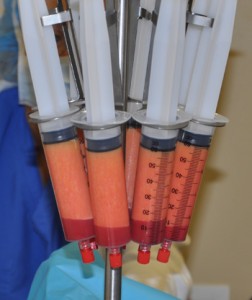 ‘There are several techniques currently employed to prepare harvested fat for re-injection, all of which strive to separate the liquid fractions – blood, free lipids and injectate – from the cellular component.These include straining and washing, free-standing decanting, machine centrifugation, hand-held separation using centripetal force and low-pressure forced staining using low-micron filters. Much debate surrounds which, if any, of these offers a superior number of viable fat cells for transfer.’ 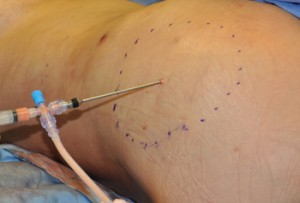 ‘Placing the fat grafts into small aliquots, say 0.1cc for the face and .5cc to 2ccs for the body, is well known to allow for the best survival rates. Fat graft retention is related to how quickly the fat cells can be nourished by blood vessel ingrowth and the delivery of oxygen. Bog globs of fat are hard to get perfused, while small droplets interspersed about the tissues allow the best opportunity for nutrient perfusion.’

‘The longevity of fat grafts remains a topic of debate. The retention of fat grafts, both short- and long-term, is not a completely well known issue. It is believed, and considerable experience shows, that what survives at three months after injection is what will be ‘permanent’. But whether this same fat survives five or ten years later is not precisely known, and it may depend on what specific condition is being treated.’

A NEW APPRECIATION OF FAT

‘Fat as long been reviled as the unsightly side effect of weight gain or natural genetics, but is a critical component of many of the body’s key functions. What was once thought to be a useless and unwanted tissue has ironically turned out to be a depot of regenerative material. Plastic surgery has just scratched the surface of what fat has to offer, and a whole new generation of research and clinical experience will take us much further than what we know today.’