Sagging soft tissues of the chin, also known as a witch’s chin deformity or chin ptosis, is the result of a loss of attachments. One cause is that of aging, particularly in the person who wears dentures, where the jawbone has resorbed down to the point of loss of the upper mentalis muscle attachments. In the younger patient, however, the most common reason is that of implant removal and/or replacement from a prior chin augmentation procedure. The chin tissues have been lifted off to initially place the implant and its subsequent removal has created a permanent loss of ligamentous attachments and the soft tissue chin pad sags off of the bone.

Correction of the witch’s chin (chin ptosis) requires the resuspension of chin tissues onto the bone or the removal of the overhang and a submental tuck. In the aged chin if the amount of chin projection is satisfactory, it is a matter of improving the soft tissue attachments to the bone. While I have done numerous types of intraoral soft tissue resuspension techniques, the long-term success of that procedure in my hands has not been good. It is much more successful if some chin augmentation is needed as the implant provides a shelf of support for the resuspended soft tissues. 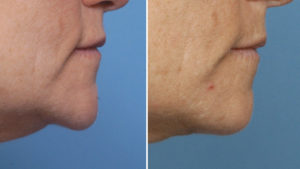 Otherwise I prefer a ‘down and under’ approach of removing loose skin and muscles from a submental incision and tightening it on the underside of the chin. (submental tuck-up) That is much more predictable because it removes what is loose rather than trying to suture it back up. 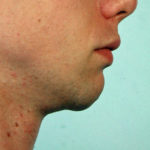 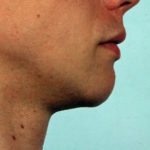 The chin ptosis that occurs from an implant removal poses different considerations. Does the patient still want increased chin projection or not. If not, a submental tuck-up approach is done. Often a scar already exists under the chin and it is merely lengthened a bit to remove and tighten the tissues. If more chin projection is still desired and the patient is equivocal about another implant, then a bony genioplasty may be done. The bone is moved (which helps support the sagging soft tissues) and the mentalis muscle and chin tissues is reattached on top and behind it to the fixation plate that is used. A chin implant can still be used in this case but a limited submental tuck-up will likely still be needed.