Chin reduction, while less commonly performed than chin augmentation, is also an important form of chin reshaping surgery that can improve one’s profile. It involves changing the size and possibly the shape of the chin in order to make it appear smaller. It is far more commonly performed in females than in men. It is beneficial to those who have a large chin that looks disproportionate compared to the upper two-thirds of the face. A chin may look too large in two dimensions, either being too long vertically or projecting too far forward horizontally. In some cases, both dimensions of the chin may be enlarged but usually one dimension is largely at fault.

While it is tempting to use an intraoral approach and burr down the front of the chin, this can be ill-advised and is a potential cause of soft tissue chin ptosis. The soft tissue chin pad simply falls off of the reduced bone and can regain its periosteal attachments like before. At the least if this approach is taken for a small reduction of a few millimeters, a strong mentalis muscle resuspension is needed for chin ptosis prevention. But in general this approach should be avoided. 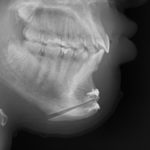 Similarly this also applies to using a reverse sliding genioplasty to set back a horizontally prominent chin. While it does move the chin bone back and the soft tissue chin pad remains attached to the bone, it will create a submental soft tissue fullness. This is due to the posterior wings of the osteotomy ending up below the inferior border of the jawline. In essence the excess soft tissue is shifted to below the chin from the front of the chin.

The safest and more effective technique for more significant horizontal chin reductions is a submental approach. Through an incision underneath the chin, the bone is exposed and the desired amount of excess bone removed. Because the attached soft tissues have had to be stripped off of the bone, they must be reattached tightly or sagging (witches chin deformity) will occur afterward. Excess muscle and skin are removed and sutures are used to reattach them tightly around the reduced chin bone. In essence a submental tuck is performed as part of the horizontal chin reduction.

A chin that is too vertically long is corrected by a wedge ostectomy of the chin. Through an intraoral approach, the chin bone is exposed and a reciprocating saw is used to remove a horizontal wedge of bone of the desired thickness. Usually it takes at least 5 to 6mms of bone removal if not more to make a real noticeable difference. Small plates and screws are used to hold the shortened chin bone together so that it can heal.

An alternative approach is an inferior border ostectomy done through a submental incision. This can also narrow the chin by lateral ostectomies as well. Good muscle resuspensions and soft tissue excision is the key to a successful outcome with this ‘down under’ technique. This is a good approach if there is already an excess of soft tissue tissue over the entire chin prominence.