Soft solid silicone implants are commonly used in men to augment multiple muscles throughout the body. Enhancement of the chest (pectoralis major) and calves (gastrocnemius) has been done for a long time as evidenced by multiple styles and sizes of performed commercially available implants to do so.

More recently other muscle groups of the upper body are being done in the arm (biceps and triceps) using either modified forms of calf implants or contoured carving blocks that have a cylindrical shape on its outer surface. While not specifically marketed for muscle augmentation of the arm they are effective because their shape mimics the biceps and triceps in flexion (biceps) and extension. (triceps) 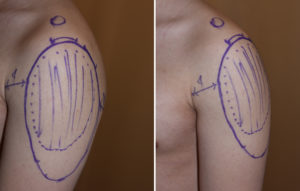 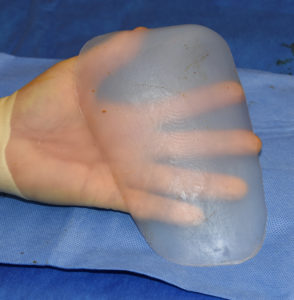 For this reason custom deltoid implants can be made to satisfy the unique shape and aesthetic needs of the shoulder.  They can be place through either a high posterior axillary incision or a superior incision made right at the crease of the shoulder that is created when abducts their arm. The extra soft low durometer of the implant’s composition make it amenable to pass the implant through  a 4 cm long skin incision.

Custom deltoid implants can be made more like an oval or the upper portion can be more squared off for a stronger shoulder shape. They are placed in the subfascial pocket which allows for a fairly rapid recovery after implantation.