Custom Facial Implants – VI. Improving Projection of the Nasal Base 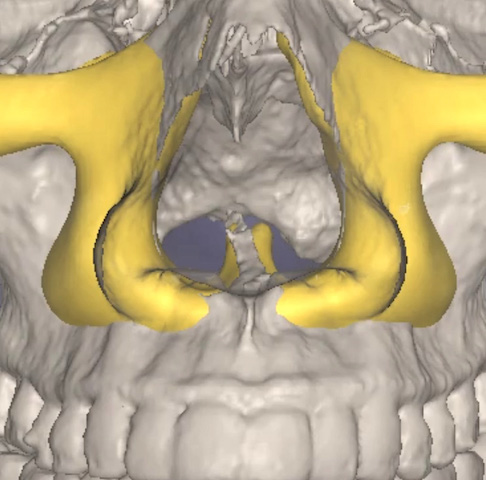 Many flatter midfaces in profile have an inadequate central midface projection. This is often called a ‘Lefort I’ deficiency referencing the procedure used historically to correct it when a Class III malocclusion is present. This is most manifest as a nose that looks sunken in at its base at the nostril level above the upper lip. The columella may or may not be retracted as well with a more acute nasolabial angle. The nose above may have an ill defined tip and a low bridge. But most importantly the maxilla is flatter around the pyriform aperture area. 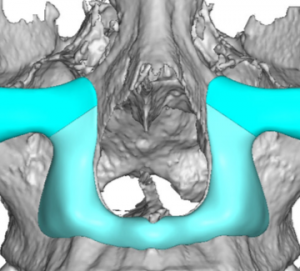 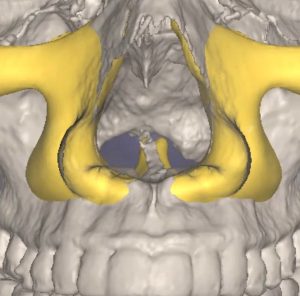 Various preformed and hand made implant methods exist to augment this part of the midface. Premaxillary and paranasal implants exist which can be used separately or together.  While these midface implant approaches can be effective for some patients, custom implant designs provide a more comprehensive implant approach. They have the advantage of creating designs that hug up tightly against the pyriform aperture to optimally be positioned right under the nostril base. They can be designed as isolated paranasal implants that blend out into the canine fossa or a U-shaped combined premaxillary-paranasal implant that pushes on the entire nasal base across the anterior nasal spine. This U-shaped central paranasal-premaxillary implant design is particularly effective and can be combined with an infraorbital extension. This provides a very visible forward projection of the nose.

The custom premaxilary-paranasal implant is placed through an intraoral approach using a high vestibular incision. Getting a good two layer musculomucosal layer closure is important particularly when the implant crosses the premaxillary region. Small screw fixation is used up  high along the upper flanges of the paranasal component to ensure a snug fit up against the pyriform aperture bone edge. Getting the most push on the nasal base requires being as far  against the pyrif0rm aperture as the tissues will permit.