Custom Implant Design Possibilities for the Treatment of Undereye Hollows 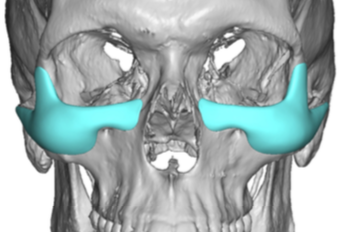 The undereye region is a frequent area of aesthetic dissatisfaction. In the older patient it is sagging lower eyelid skin, bags and wrinkles for which various blepharoplasty and skin resurfacing techniques exist to provide substantial improvements. But in the younger patient aging soft tissues are not the primary cause of undereye concerns. Rather lack of structural support is the reason as undereye hollows, lower eyelid sag/excessive scleral show and negative orbital vectors are the typical aesthetic concerns.

For providing improved support to the infraorbital bone, a variety of materials and grafts have been used. Moving beyond temporary injectable fillers, fat injections are popular but largely ineffective for most patients due to poor take, and often resultant puffy appearance and potential irregularities. On the opposite end of the autologous spectrum bone and cartilage grafts are rarely used due to the need for larger harvests and an inability to get a consistent and smooth contour with their use.

Implants remain the most effective method to augment the infraorbital rim which offer the smoothest contour and permanence. The best implant method remains the custom implant approach which can be thought of as infraorbital and infraorbital-malar design styles. 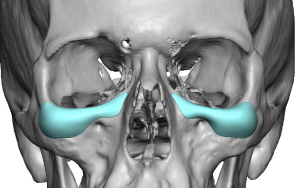 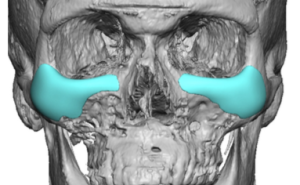 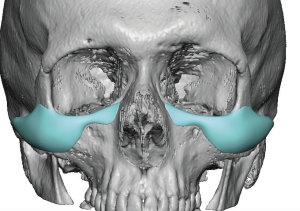 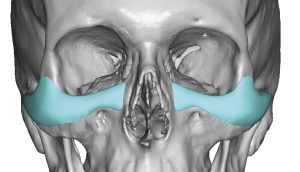 In the treatment of modest or more moderate undereye hollows many male patients also want a cheek augmentation effect as well. When combining both areas the custom infraorbital-malar implant is born. Its design creates a connected augmentation that wraps around the cheekbone prominence to extend out onto the zygomatic arch. This is the definition of the high cheekbone look which is a horizontal line of augmentation along the infraorbital skeletal line. One of the key design elements is the only the convex portion of the cheekbone is covered. To avoid creating cheek fullness that extends too low, which most men do not want, only the upper half or 2/3s of the cheekbone should be covered. The underside or submalar portion of the cheekbone area is to be avoided as this is what standard cheek implants typically cover. 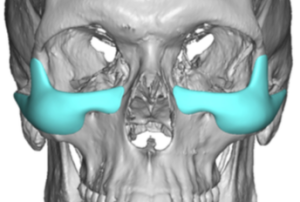 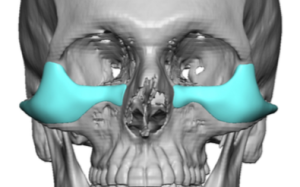 Some undereye hollow patients, however, are part of a more global skeletal deficiency. They have a negative orbital vector which really means the entire ZMC tripod complex is underdeveloped or rotated inward. (a bit like a ZMC fracture. With this type of orbital skeletal deficiency the custom infraorbita-malar implant design must be bigger. The term bigger does not necessarily mean thicker in projection but has a more extensive surface area coverage. This means its ‘legs’ are longer up along the lateral orbital rim, the zygomatic arch and down over the cheekbone towards the maxilla. The implant coverage needs to treat the full extent of the skeletal deficiency.

Custom infraorbital +/- malar implants offer a wide range of augmentation possibilities for the undereye hollow patient. Their ability to vertically augment the infra- and lateral orbital rim is a feature they bring that no other implant/graft/material can provide in such a controlled fashion. Unfortunately their use is either overlooked or unknown as many surgeons continue to use standard implants for this orbital area which frequently provide less effect than the problem for which they are intended to treat.