The nasolabial fold is a well known facial area that deepens with age. This has resulted in it being a common target for a variety of treatments that include injectable synthetic fillers and fat as well as the placement of subcutaneous implants. Regardless of the treatment they all are directed towards pushing out the linear skin indentation at the subcutaneous level.

In recent anatomic studies the deep medial cheek fat compartment has a space deep to it known as Ristow’s Space. This has been described as a triangular paranasal area sitting right over the pyriform aperture. As a result of fat atrophy as well as bony resorption that occur with aging around it, Ristow’s space increases. Voluminization of this deep space has been proposed to be a new target in the treatment of the prominent nasolabial fold. The exact anatomic boundaries of this space, however, have never been precisely studied or defined.

In the July 2016 issue of Plastic and Reconstructive Surgery an article appeared entitled ‘Deep Pyriform Space: Anatomical Clarifications and Clinical Implications’. In this anatomic study the average dimensions of the deep pyriform space was essentially 1cm x 1 cm. The space has an inverted triangular shape that is bordered inferomedially by the depressor septi nasi muscle, the soft tissue attachments of the bony pyriform aperture and the retro-orbicularis fat. The premaxillary space and the levator labii superioris muscle sit above it. The angular artery lies superficial and lateral to the deep pyriform space.

The authors describe an injection technique to access this space for voluminization using blunt cannulas. With the cannula at the bone level the deep pyriform space is entered. They recommend very cohesive fillers like Radiesse or fat, presumably due to their better soft tissue push at this deep level, than hyaluronic-based fillers. 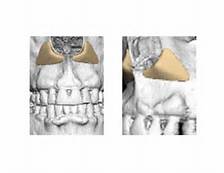 The deep pyriform aperture space is a midface cavity that is intimate to the pyriform aperture. It is accentuated by resorption of the face of the maxillary bone with aging. Pushing out on this space adds support to overlying cheek fat and lip elevators. Given the location of his space, it would intuitively seem like augmentation of the bone with an appropriately designed implant would provide a better long-term solution than any injectable filler.