The tail bone is well known bony structure at the end of the spine. Known as the coccyx (Greek word for cuckoo), it gets its name due its beak-like appearance due to the bend in the fused vertebrae which make up its bony length. It usually is convex on the back side and concave on the stomach side. It does attach to the sacrum through muscular and fascial attachments and can be a fixed attachment or actually that of a true joint where it joins to the sacrum.

Pain in the tailbone (coccyx) is known as coccydynia. There are a wide variety of reasons  one can have coccygeal pain that is not due to trauma. (e.g., fractured coccyx or dislocation at an intercoccygeal joint) Chronic sitting is one reason which can put pressure on the coccyx causing a strain. One may be more prone to coccygeal strain if overweight causing a posterior subluxation of the coccyx. Conversely, if one is very thin with little subcutaneous fat to protect the bone it may develop bony spicules due to chronic pressure. Interestingly, coccydynia occurs much more frequently in women by a reported four to five times greater frequency than in men.

Treatments for coccydynia are usually non-surgical in nature including oral medications, protective cushioning and local anesthetic injections. When all else fails, surgical coccygectomy can be done but this is associated with significant after surgery discomfort and a prolonged recovery. 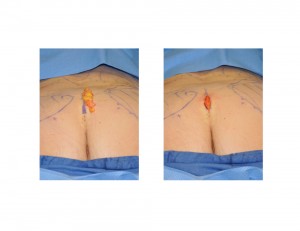 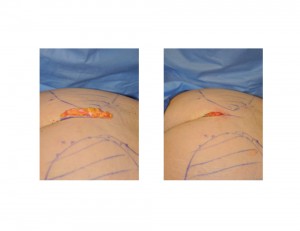 An alternative surgical option is a dermal-fat graft. Rather than removing the coccygeal bone, adding a protective tissue layer for additional cushioning is an option in very thin people. A dermal-fat graft can be harvested from any abdominal scar or from making a small low horizontal abdominal incision. (like that of a c-section) Using a small vertical incision (no greater than 3 cms) a subcutaneous tunnel is made right over the coccyx. The dermal-fat graft is placed into the tunnel and the skin closed over it.

Dermal-fat grafts have a great propensity for a high take rate if they are not unduly large. They quickly become revascularized and incorporated into the surrounding tissue. By adding an additional fat layer over the coccyx, a cushioning effect can be obtained. In the properly selected coccydynia patient who has a very thin soft tissue cover over the coccyx, adding a dermal-fat graft can help alleviate chronic discomfort.