The desire for fuller and more shapely lips has been achieveable for some time through injectable fillers. The ability to spot place plumping volume anywhere on the lips can really allow for some true sculpting of certain lip areas. The lips are comprised of numerous anatomic areas which are commonly injected, mainly along the vermilion-cutaneous junction (white roll) and into the body of the lip itself. That will certainly make the overall size of the lips bigger. 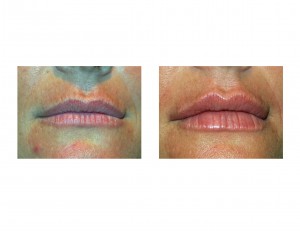 While injectable filler lip treatments are both immediate and dramatic, they are only temporary. Even in the most ardent and motivated patient, lip injections are not fun and can be the most uncomfortable of any facial injection treatment. (unless done under local intraoral vestibular infiltration…better but still not fun) Permanent solutions to lip augmentation have been tried with varying success. For permanent lip volume augmentation, I have found the use of Advanta soft tissue round or oval implants effective when placed in the body of the lip for horizontal volume fill.

Synthetic implants in the philtrum, however, have not been as successful. They are prone to contracture and distortion with resultant philtral asymmetry. This is because they are not rigid and are placed in the very moveable and often manipulated part of the upper lip. Think about how many times you touch and rub your upper lip…not to mention stretching and pulling it down. 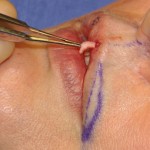 A more effective alternative philtral methods of augmentation is allogeneic dermal grafting. These soft collagen implants can be cut into small strips and placed through a vertical vermilion fissure or crack incision. Depending upon the thickness of the graft (usually 1 to 2mms thick), they can be inserted in either a single or double stacked fashion. Fine tunnel dissection is done just under the philtrum up to the columellar base. The grafts are quickly inserted and the incision closed with one or two small sutures which are removed a week later. (dissolveable sutures can also be used. The change in philtral height and definition is immediate. 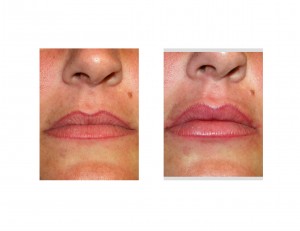 Several of the really nice things about dermal grafts in the lip is that they are soft and, because of their collagen makeup, will integrate and become part of the philtral tissue. That is especially important in the upper lip where vertical stretching and compression is part of repetitive daily lip movements.

This simple procedure can be done as part of any other lip procedure, usually as part of surgical augmentation procedures such as lip lifts and advancements. It is done under local anesthesia in the office with minimal swelling and rarely any bruising. There is no visible scar from the  small incision in the vermilion.