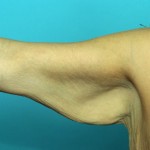 Arm lifts or Brachioplasty is a plastic surgery procedure that removes excess skin and fat from the arm. The trade-off for this skin removal and tightening of the upper arm  is a long scar that runs down the arm. This cut out of skin and the resultant scar can be done on either the inside or back of the arm. There are advantages and disadvantages  to either approach and I always leave the decision up to each patient. The arm lift can be done successfully with either approach.

The most common location for the skin and fat cut out for an arm lift is the medial approach on the inside of the arm. In theory, this places the scar on the most hidden part of the arm. That point is debatable in my mind as the scar would only be hidden if your arm is down and by your side. Certainly if you raise your arm and are in short sleeves, the scar is not hidden. A fair amount of skin can be removed with this approach but cutting out too much is a possibility, making for a very tight closure and the likelihood of having wound separation problems after. It is easy to take too much with this approach and a tight closure with the very thin skin on the inside of the arm makes for some wound healing issues which are common.

The other approach for an arm lift is on the back of the arm. The skin and fat cut out and final scar runs down the backside of the arm. In theory, the patient doesn’t see the scar but everyone else does. (at least if they are behind you) I think that more skin can be removed and better arm tightening can be obtained with this approach. My experience is that less wound healing problems occur when the arm lift is done this way, probably because the skin is a little thicker and holds sutures better.

With either approach it is often necessary to extend the skin excision into the armpit and even beyond. This is unique to the extreme weight loss patient. The sagging skin usually extends into the armpit and into the side of the chest.  Either the inside or back of the arm lift approaches can be extended downward  to include this area. By doing so, both approaches run the risk of creating a scar contracture or tight band where it crosses the attachment of the arm skin to the chest skin. This is noticeable only when one raises their arm, particularly above the level of their shoulders or above their heads.

Despite their subtle differences, both the inside and back of the arm approaches to the arm lift are equally effective. One should choose either approach based on which scar location one finds the most acceptable.