Do The Plates and Screws Need To Be Removed After Shoulder Narrowing Surgery? 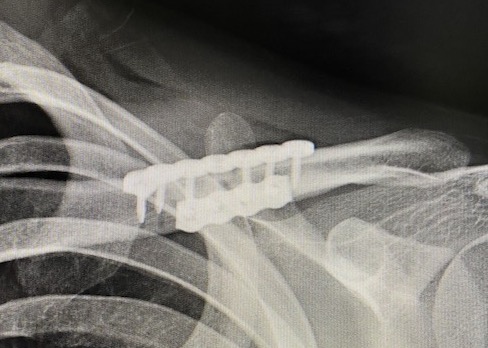 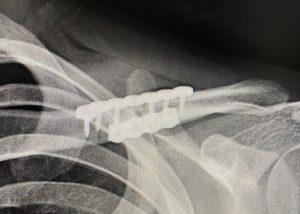 The success of shoulder narrowing surgery is ultimately determined by complete healing of the ostectomy site. This is made possible by the application of rigid fixation using 2.7mm plates and bicortical screws. To date all patients have gone on to complete healing of their clcvciicl shortening sites. Once healed the long-term question is whether the plates and screws should be removed. I am not referring to whether the patients desires to remove them due to multiple reasons (aesthetic prominence, discomfort) but whether the hardware may cause stress-shielding or other symptoms.

To best answer this question we need to refer to the orthopedic surgery literature where a large clinical experience with clavicle fractures is known. While a clavicle reduction osteotomy and a clavicle fracture repair are not perfectly identical initially, they are when they are both healed and the question remains about whether the fixation hardware needs to be removed.

In the 2011 October-December issue of the International Journal of Shoulder Surgery an article on this topic was published entitled ‘Is Removal of Clavicle Plate after Fracture Union Necessary?’ In this clinical paper the authors assessed forty-eight (48) patients who had mid-clavicle feature repairs. The aim of their study was to determine if patients developed symptoms if their plates were left in. Of the 48 patients 27 (56%) had their plates removed due to local symptoms. (discomfort, limited range of motion during sports or activities of daily living) The remain 21 patients (44%) had their plates left in as they did not feel that any symptoms they had were worth having them removed or were never offered plate removal. Only three of these patients would consider plate removal if it was available to do so. No differences in shoulder function were observed between those that had their plates removed and those who did not. The authors conclude that they did not recommend routine plate removal unless the patient specifically requested to do so.

While this study is relevant there is one important difference. The size of the plates, in thickness and length, used in clavicle fracture repair is far greater than used in shoulder narrowing surgery. Thus it is no surprise that a significant  percent of the clavicle fracture patients had their plates removed due to local symptoms. But despite these larger plates those that had them left in were not motivated to have them removed.

Thus with the smaller plates used in clavicle reduction osteotomies and their location routine hardware removal is not recommended. These smaller plates are far less likely to cause local symptoms than larger clavicle fracture repair plates.