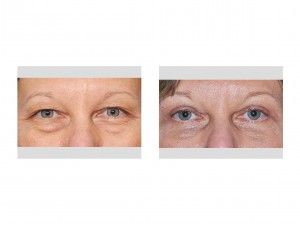 Blepharoplasty or eyelid lifts are one of the most common types of anti-aging facial surgery. Their results are usually so significant that they have earned the moniker of best ROI (return on investment) in the face. Changing that tired look to a refreshed one can be a significant change which just makes one look more alert and fresher. While the procedure usually causes some significant swelling and bruising, there is usually little pain other than some tightness.

But unlike tightening the neck and jawline, removing excess skin and fat around the eyes and tightening them always runs the risk of causing some eye symptoms. The eyelids do play a vital role in eye protection and lubrication which is easily overlooked…until some change in their closure function occurs. Eyelid lifts do temporarily interfere with eyelid closure, particularly when all four eyelids are done simultaneously, and this can cause some decrease in their lubrication function.

While dry eyes are a known risk in blepharoplasty surgery, how frequent does it usually occur? Such was the focus of a study published in the  October  2012 issue of the Archives of Facial Plastic Surgery from a large blepharoplasty population out of one surgeon’s practice in Indianapolis Indiana. From nearly 900 patients who had eyelid lifts done over a 10 year period, the incidence of dry eyes both before and after surgery was followed. Around 25% had some degree of dry eyes after surgery and another quarter of the patients also reported swelling of the lining of the eyelids known as chemosis. Often these two occurred together in patients who had all four eyelids done together as opposed to just uppers or lowers eyelids. Most of these eye side effects were temporary and routinuely managed by eye drops and/or ointment. 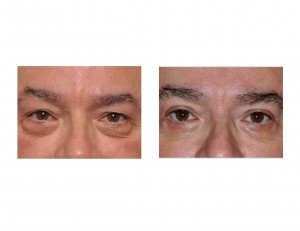 This study shows that dry eyes are not rare after eyelid lift surgery and is a direct result of disrupting the blinking action caused by the orbicularis muscle. When the blink reflex is decreased, particularly when eyelid closure may be incomplete, the cornea lacks adequate protection from the inadequate spread of the tear film. This results in dry eye symptoms and swelling of the eyelid lining (chemosis) as it strives to regain competence of globe protection.

Dry eyes do not happen to everyone after blepharoplasty surgery and some patients have signs of increased risk beforehand. A loose or lax lower eyelid surgery is the most recognizeable one as well as anyone that reports a history or active dry eye problem. This study interestingly showed that the risk is higher in patients on hormone replacement therapy although the exact reason is unknown.  (more women over 50 have the procedure than men)  Aggressive surgery can also cause the problem when too much skin is removed from the lower eyelid, internal canthal suspension procedures are done or aggressive midfacial lifting techniques are simultaneously performed.

While dry eyes after blepharoplasty is usually a temporary problem, it is not pleasant when the patient is going through it if it is significant. Avoidance is always the best treatment and that comes with recognizing the high risk patient and avoiding aggressive lower eyelid surgery which is almost always is the culprit. This may mean less skin removal on the lower eyelid or using an inner eyelid approach (transconjunctival) instead.