Dual Forehead Reshaping with the Combination of Hairline Advancement and Browlifting 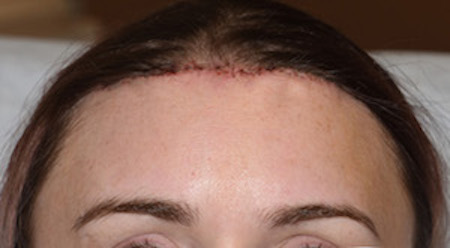 Soft tissue reshaping of the forehead consists of two basic types of procedures based on the anatomic landmarks of the eyebrows and the frontal hairline. (at least in women) There is the conventional rejuvenative browlift procedure which elevates or alters the shape of the brows at the lower end of the forehead. At the superior end of the forehead is the hairline whose position and shape can be surgically altered, most commonly in the forward/inferior direction.

Not infrequently a female patient will be seen for a browlift who also has a high hairline. This creates the opportunity to solve two forehead problems at once. By definition this requires a frontal hairline incision. While I frequently combine this with a direct browlift it can also be done with an endoscopic browlift technique as well.

In the July 2021 issue of the Archives of Aesthetic Plastic Surgery an article was published on this topic entitled ’Upper Facial Surgery: Simultaneous Hairline-Lowering  Surgery During Endoscopic Forehead Lifting’. In this paper the authors looked at concurrent frontal hairline advancement with an endoscopic browlift technique for the high hairline female. A single hairline incision is used to perform both procedures. A bone tunnel suture technique was used for the advanced scalp flap fixation.

Nearly 200 patients were treated with this combination forehead surgery. The average central hairline lowering was 18mms while the average browlifting effect was 5mms.

One of the really unique features of doing a combined scalp advancement and browlift through a hairline incision is that  forehead skin is actually removed, unlike an endoscopic browlift where no skin is removed and the hairline is potentially shifted even higher. There is the synergistic effect of lowering the hairline with the browlift which makes the whole forehead look smaller. 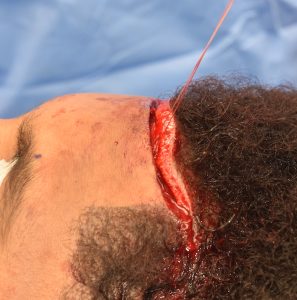 One of the key maneuvers in the frontal hairline advancement is the method of bone fixation which is crucial in my opinion for both frontal hairline stability as well as for scar widening prevention. Bone tunnels are an excellent non-implant suture fixation method which requires some comfort in drilling through the outer table of the skull. The key is where to place the bone tunnels (I usually use three of them (central and more lateral) which is at the leading edge of the desired position of the new hairline. The suture passes through the bone tunnel and then through the galea of the scalp. This keeps all tension off of the skin closure and also away from the hairline.

One can have a debate about whether the browlift done at the time of the frontal hairline advancement should be done open or endoscopically. Once the hairline incision access exists the value of the endoscopic approach is diminished. But this choice really comes down to surgeon preference.