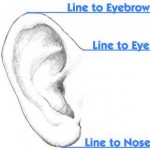 But there are ears that are occasionally too big or oversized known as macrotia. In essence they are disproportionately large in height compared to the size of the head. Anthropometric measurements have shown that the normal vertical length of the ears are around 60mms in women (58 to 62mms) and somewhat larger in men, averaging closer to 65mm. (range of 62 to 66ms) The height of the ear has also been historically stated to be equal to the length of the nose although this is a far less reliable measure of an acceptable size. Ultimately, however, what appears is whether the patient thinks their ears are too big or not.

Just like for the protruding ear, there is an otoplasty surgery to make big ears smaller. (less tall) Unlike protruding ear surgery, however, skin and cartilage must be removed to reduce its vertical height. While one method is to take out a large central wedge from the middle of the ear, this produces more of a visible scar that crosses two two ear ridges as it goes from the concha to the outer helix. This is more of an ear reconstruction technique commonly used in skin cancer. 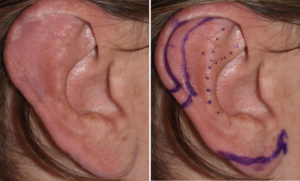 A more aesthetic ear reduction technique for macrotia is the ‘high’ and ‘low’ method. Taking some tissue from the top and the bottom of the ear creates a noticeable height reduction while placing scars in more inconspicuous locations. This ear reduction surgery is done by a ‘high’ excision by the taking of a crescent-shaped segment of skin and cartilage from the scapha fossa. Depending upon how much height needs to be reduced, this may or may not cross the helical rim at its lower end. The ‘low’ excision involves a helical rim wedge excision along the bottom part of the ear lobule. As much as 10 to 12mms of ear height can be reduced with this ear reduction method.

Unlike setback otoplasty, ear reduction otoplasty surgery actually involves less recovery and swelling of the ear as the actual extent of surface area of the ear traumatized is less.