Changing the Attachment of the Earlobe to the Face

One of the features of an earlobe is in how they attach to the face. In some patients the earlobe curves upwards and attaches to the face in an inverted V shape. They are often referred to as unattached earlobes. In other patients the earlobe joins the face directly without any break in he attachment. This is often referred to as an attached earlobe. While earlobes are often described as either attached or unattached (free), the reality is that there are variations that commonly occur between these types.

Some people desire to change the way their earlobe attaches to the face. It is fairly easy surgically to take the unattached earlobe and make it attached. This is done by excising skin from the medial side of the earlobe as well as a similar strip of skin on the opposing facial side. the two are then sutured together. This union heals very well and does so in a virtually scarless manner. 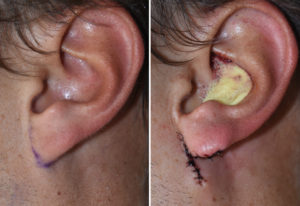 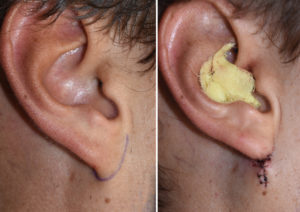 Converting an attached earlobe to an unattached one poses a slightly different challenge. The skin attachment is released and the medial side of the earlobe is sewn up along its open margin. This changes the earlobe into a more rounded lower shape. But the facial side of the wound opening must also be closed and is done so in a linear fashion. This leaves behind a vertical scar in an unnatural location. Fortunately the wound closure heals fairly well in this location and can be partially obscured by the earlobe itself.

Changing the attachment of the earlobe to the face can be done under local anesthesia with negligible swelling and no real recovery.