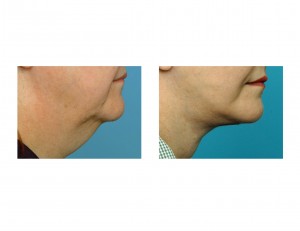 But some of the most telltale signs of having had a facelift occur later…and many patients are not aware that they even exist. These delayed signs are the result of either visible scarring or distortion of the ear or surrounding hairline.

One such telltale sign is that of the changes in the earlobe. If too much skin is removed around the earlobe during the lift or of there is excessive tension on it during closure, the earlobe will eventually change shape. This occurs where the earlobe attaches to the face and it  becomes stretched out. This has been described as a pixie ear or satyr ear. No matter what its description, the earlobe changes from a rounder shape to an elongated pulled-down appearance. Around the stretched out earlobe will appear the facelift scar as a fine white line as it attaches to the face.

How does the earlobe become stretched out after a facelift? Excessive tension placed on any incision can cause a widened scar. But too much tension, combined with the downward pull of gravity, will cause the skin to recoil back from whence it came, pulling with it the earlobe attachment. This is an unnatural earlobe appearance and a ‘marker’ for having had a facelift.

The way to prevent a pixie ear is to use a cradling technique as part of the facelift procedure. This means the lifted skin is advanced upward under the released earlobe and secured. Then the earlobe is reattached either by making a pilot cut in the underlying skin or to close the released edge of the earlobe before suturing it back down. Either way, there is a good chance that the earlobe will look more detached from the side of the face than before surgery. In my Indianapolis plastic surgery practice, I inform all my facelift patients that their earlobes will look initially a little different because of this change. But they will settle down and resume a more normal appearance within weeks. This is the best way to avoid the late telltale sign of the pixie ear, particularly when there is a direct attachment to the face.

If you have a pixie ear deformity, there really is only one way to correct it. It will require a secondary tuck-up facelift to advance skin back up under the earlobe. This uses the old earlobe and some part of the incision going along the back of the ear. The facial skin can then be cradled and the earlobe can then be shortened and reattached with a more normal configuration. In small pixie ears, it may be possible to manipulate the earlobe only and get a shortened and more detached appearance.